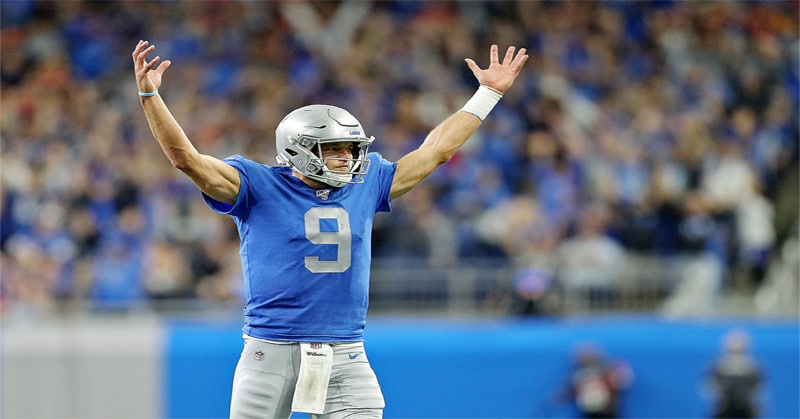 Where will Matthew Stafford end up?

It sure sounds as though we could have a lot of franchise quarterback changes for the 2021 season. The move of Tom Brady from the New England Patriots to the Tampa Bay Buccaneers was a major shocker, simply because we are just used to face-of-the-franchise quarterbacks staying in one place.

Guys like Brady, Drew Brees, Matt Ryan, Aaron Rodgers, and Matthew Stafford are hard to envision wearing a different uniform. Brady is now in the Super Bowl as a Buccaneer, taking his winning ways to the NFC and the Sunshine State. Brees is expected to retire and wear the uniform of a dad for a while.

Ryan seems to be staying put with a new regime in Atlanta, but Rodgers and Stafford could be leaving their respective NFC North teams in hopes of finding greener pastures or at least some new land to roam.

Could Matthew Stafford find his way to Colorado?

The odds at SportsBetting.com suggest that it could be a distinct possibility. Maybe it just some wishful thinking from the Colorado-based sportsbook, but the hometown Denver Broncos are listed as the favorites as Stafford’s new team by September 1, 2021. The Broncos are lined at +300 for his services.

The Indianapolis Colts are +400, with the Washington Football Team at +500, the Chicago Bears at +600, the Dallas Cowboys at +800, and the Carolina Panthers at +900. Even the Las Vegas Raiders, New England Patriots, and New York Jets are all listed at +1000.

DOUBLE YOUR DEPOSIT WITH A WELCOME BONUS FOR SPORTSBETTING.COM

It is difficult to remember an offseason in which so many quarterback situations were in limbo. The Colts have to replace Philip Rivers, who retired to have more children or at least play with the 27 that he has. Washington needs a quarterback, though Alex Smith proved he could still play the position. Stafford is still an upgrade.

The Bears may have seen enough from Mitchell Trubisky late in the year to stay above the fray in the quarterback department. The Cowboys could still just go ahead and re-sign Dak Prescott, but he is coming off of a major injury. The Panthers and Teddy Bridgewater may opt to part ways. The Panthers could also be in serious consideration for a quarterback in the NFL Draft, much like the Patriots and the Jets.

But, the Broncos are an interesting fit at the top of the list. It wasn’t that long ago that Denver drafted Drew Lock. Lock hasn’t been great by any means to start his NFL career, but he’s been hurt and so have his skill position players. The offensive line has also been a revolving door of any health body slotting into pass protection.

Would it be too soon to punt on Lock? Will the Broncos trade their first-round pick to the Lions for Stafford? Would it take a top-10 pick to get the former Georgia Bulldog?

There are a lot of questions during the NFL offseason and this burning question from SportsBetting.com is at the top of the list.

You can sign up at SportsBetting.com in Colorado and place a bet on the Broncos or any other team for the services of Stafford. SportsBetting.com offers a lot of daily and weekly promotions and bonuses, including up to $50 on an NHL refund if your team gets shut out or Parlay Protection worth up to $50 in free bet credits.

You can Double Your Deposit up to $300 right now in advance of Super Bowl LV, where SportsBetting.com will offer Boosted Odds and all sorts of prop betting options for the big game on February 7.

DOUBLE YOUR DEPOSIT AT SPORTSBETTING.COM