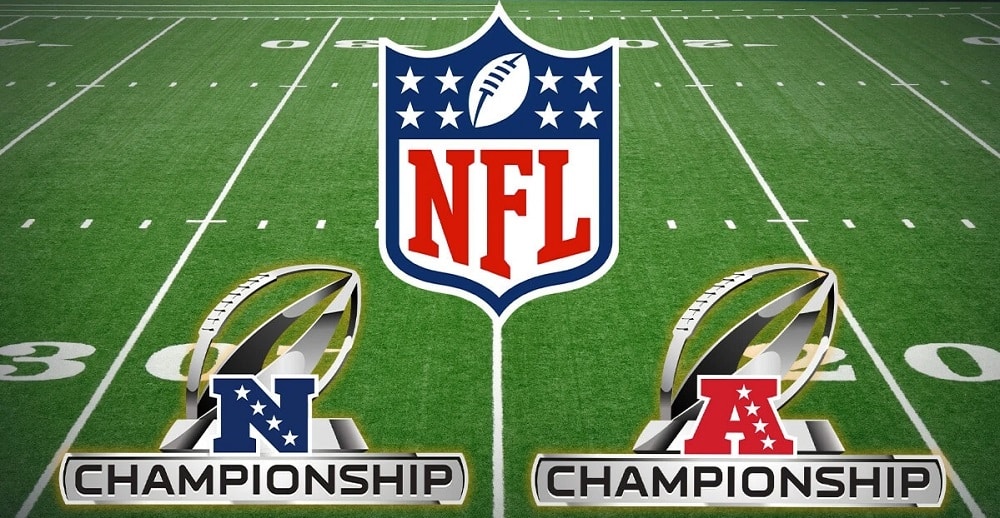 The NFC and AFC both have their share of talented teams, but only one team can win each conference en route to the Super Bowl. Here, we take a look at the odds to win each conference, to get an idea of which teams are being given the best chance by oddsmakers to face off in the big game in February. As these NFL conference championship odds can change throughout the season, be sure to check back regularly to get the latest odds.

The NFC is pretty wide open at this point in the year, as there are realistically about eight teams that can win the conference championship out of the 16 teams in it. There is no clear favorite to win the conference title just yet, but there is a pack of about five teams with better odds than the rest in the first half of the season.

Perhaps the most surprising of those four teams is the Philadelphia Eagles. Behind Jalen Hurts, the Eagles have been very difficult to slow down when they have the ball so far this year. They are joined by the San Francisco 49ers, Tampa Bay Buccaneers, Minnesota Vikings, and Dallas Cowboys at the top of the list of NFC favorites. All of those teams have a proven track record of success on their sides, but is not a clear cut favorite in this competitive landscape.

At slightly longer odds, the Rams, Packers, and Giants are also in the mix to win the NFC. The Giants have been one of the pleasant surprises in the NFC this season, and could see their price come down if they can continue to win games.

As far as the AFC is concerned, things feel a little less wide open thanks to the presence of the Buffalo Bills and Kansas City Chiefs. Both the Bills and Chiefs have been incredibly explosive offensively. And while the Bills have a better defense to rely on, the Chiefs have already proven that they can score their way to the Super Bowl. These two teams are the clear favorites to get to the Super Bowl from the AFC, and it is not hard to see why.

There are a few teams with odds slightly longer than those of the Bills and Chiefs that could be interesting as well. The Cincinnati Bengals just won the AFC last season and could do so again if they can figure out how to protect Joe Burrow. The Baltimore Ravens could very well win the conference title if they can get consistent production from Lamar Jackson against elite teams. And the Miami Dolphins and Los Angeles Chargers both have exciting offenses led by young quarterbacks that could be a factor down the stretch this season.

How The Playoff Format Works

Those Conference Championship Games are where these specific wagers will be decided. It is important to note that conference winner odds are posted long before the playoff teams are known. As a general rule, the teams that appeared in the playoffs the previous year are usually among the favorites to win the conference.

Here at ATS, we make it very easy for you to see which teams have the best theoretical chance of winning their conference. We list the odds from shortest to longest price, and have tabs for each conference. We also give you the opportunity to compare odds at different US sportsbooks across the industry to see which ones have the best odds. The higher the price, the higher your potential winnings are going to be, so you always want to select the sportsbook that has the biggest plus figure offered and bet with them.

If you need to open a new account with a different sportsbook, we have compiled a comprehensive list of NFL betting sites. These links will get you the best offers and promos available for new users upon sign up.

If a team has odds of +450 or lower to win the conference, they will generally be the favorites. Betting on a line of +450 means that your winnings will be 4.5 times your bet amount, so you would win $450 on a bet of $100. You are not going to find minus prices to win the conference until later in the season after some games have been played and the standings are starting to shake out.

Once we reach the point in the season where minus figures start to appear, you can divide the odds from your bet amount to calculate your potential winnings. If a team is -150 and you bet $200, you can convert the odds to a decimal and do 200 / 1.5 to get your potential payout of $133.33. Always remember the plus and minus figures on odds based wagers are based on a $100 wager. Perhaps an easier way to convert is simply to change the minus figure to a fraction. In this case, -150 translates to 3/2. Assuming the wager would be to win $100, the 3/2 fraction dictates the risk would be $150.

All 16 teams from the AFC and the NFC are going to be listed under Odds to Win the Conference until they are mathematically eliminated from doing so, no matter how ludicrous it seems that they can win.

The conference champion odds are always changing based on offseason transactions, betting action, or wins and losses in the regular season, so keep it tuned right here at ATS to see the latest odds updates.