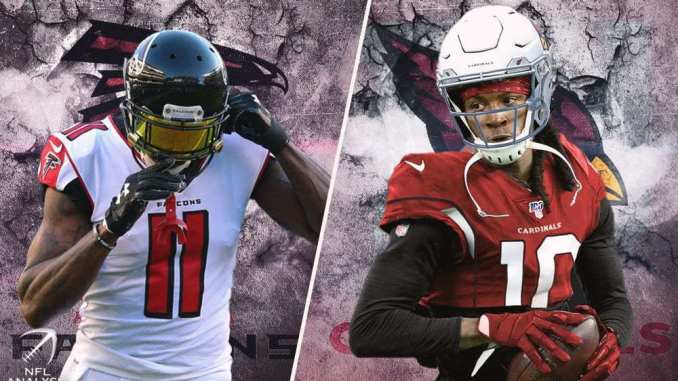 Some gamblers would advise against viewing any wager as an absolute lock. But heading into the season, banking on New Orleans Saints wide receiver Michael Thomas to lead the league in receiving yards was as close as it gets.

But then the Saints new $96.25 million-dollar-man went down with an ankle injury in Week One and may go on the IR. That would mean he is out for at least three weeks, which means he is more than likely not going to lead the league in receiving yards this season.

So, who will? Who oddsmakers have dubbed the new favorite shouldn’t surprise anyone (odds via WilliamHill.com):

As the current leader after Week One, Julio Jones is the obvious choice to become the new favorite. Of course, it doesn’t hurt that he has led the league on two other occasions an came in second to Thomas last year by 48 yards.

Atlanta has always been a passing team with Matt Ryan at quarterback and proved it once again in Week One when he threw for 450 yards. However, in that game, two other receivers had 100+ yard days. With three good receivers to choose from, that means anyone could end up being the odd man out on any given week.

Or everyone eats, and Jones leads the league in receiving yards.  It is possible but unlikely.

With how Aaron Rodgers was slinging the ball around, it looks like Davanta Adams will see enough work to make him a legitimate candidate. However, he has only had one 1000+ receiving yards season in his career.

DeAndre Hopkins certainly got off to a great start in his first game with the Cardinals. As the best receiver on the roster, it is probably safe to say performances like that (14 receptions, 151 yards) are just the beginning.

At this point, it is too early to write anyone off. But there are certainly some teams worth avoiding.  The Patriots are not going to throw it around too much. The Jets may try, but you can’t count on how well Sam Darnold will play from one week to the next. Houston’s receivers are hard to trust, as are the Giants.

It is probably safe to rule out any of the Chiefs as well. They have too many targets for any one guy to get enough work to lead the league.

Julio Jones is not a bad bet but go with DeAndre Hopkins. After getting traded from Houston and getting a new contract with the Cardinals, he has something to prove. With a young gunslinger like Kyler Murray coming into his own at quarterback, the future looks bright for Hopkins.