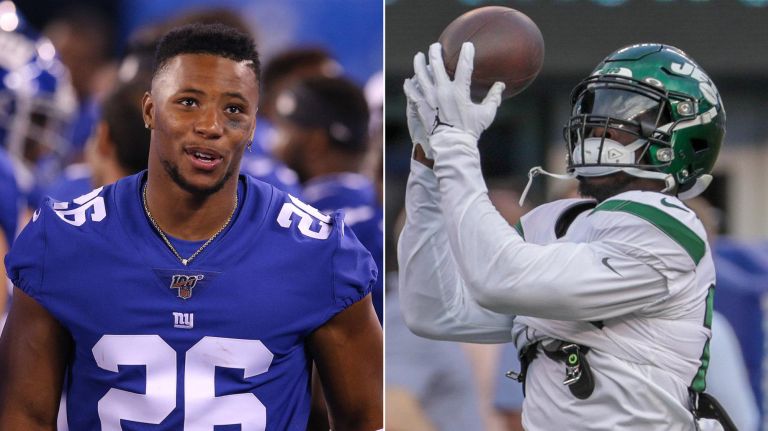 The NFL is a passer’s league. It is something that is widely known and accepted, and the reason why quarterbacks are paid (and protected) as much as they are. But this season, there has been a slight resurgence in attention to the running game.

It’s as if a few coaches have decided to take advantage of the trend towards smaller, faster defensive lineman/pass rushers by running the ball down the throat of defenses.

Just two years ago, there were only six teams that ended the season with 2000+ rushing yards. Last season there were eight, and so far this season, there are 14 on track to potentially rush for 2000+ yards this season.

So, yes—the run game is making a comeback of sorts. This week, some of the best running back in the league happen to be facing off. Want to bet on who runs for more yards? PointsBet.com and Bovada.lv are offering odds on a few intriguing matchups:

This matchup is not an easy one to call. Cook is currently leading the NFL in rushing yards with 894 so far this season (nine games played). Elliot currently sits in seventh with 741 yards (in eight games); he is averaging 92.6 yards a game and Cook, 99.3 yards/game.

But while Cook is having an incredible season, Dallas makes its money running the ball. Minnesota started the season doing the same but have since slacked off following critical comments from Adam Thielen and Stefon Diggs in the media.

Betting on this one will come down to who do you think will stick with the run when the other goes to the pass.  If the last three weeks are any indication, that will be Dallas. Both backs have had 20+ carries in each of the last three, but Cook has had one 100+ yard game while Elliot has had three.

The game itself between the Jets and Giants is not likely going to be a very good one, but this matchup between Bell and Barkley might make it a compelling enough game to watch.

In Bell, you have a guy who was once considered the best. But since returning from a year off he has not been too impressive. Part of the reason could very well be that he signed with a bad New York Jets team. Since they have no passing game, defenses can focus on him.

But in Barkley you have the newest superstar running back in the making. He has turned into one of the best all-purpose running backs—much like Bell once was – in the league. What makes him even more impressive is that he has done so despite playing for one of the worst teams in the NFL.

However, last week, he was shut down by the Dallas Cowboys and gained less than 30 yards rushing.

So—who is going to run for more yards this week?

The Jets are only allowing 89.3 yards rushing a game; the Giants are allowing 127.9. The two running backs have actually run for similar numbers (Barley—401; Bell—415). But Barkley also missed a few weeks.

Dallas may have shut Barkley down, but the Jets defense is nothing like the Cowboys defense. Bell isn’t the guy he used to be either.