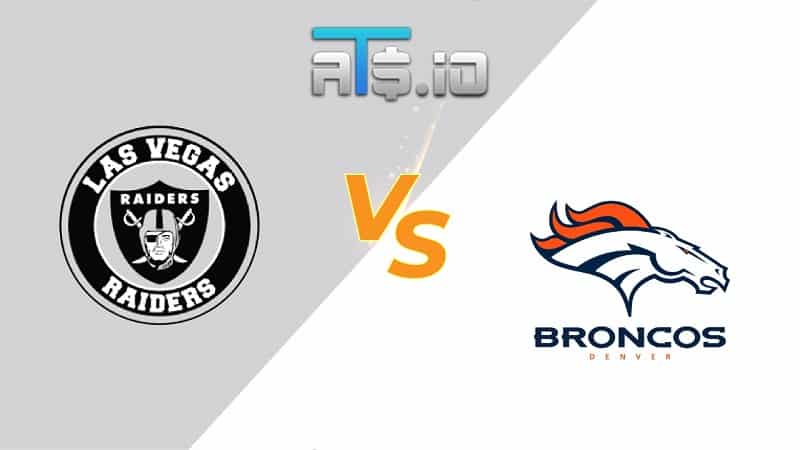 AFC West rivals will clash this weekend when the Las Vegas Raiders and Denver Broncos meet at Mile High. With controversy surrounding the Raiders heading into this game, an added layer of intrigue has been piled on top of a game that was interesting to begin with. In our NFL predictions for Week 6, we look at Raiders vs Broncos and decide on the best bet to target for this rivalry game.

New bettors at BetMGM Sportsbook can bet $10 on either the Raiders or Broncos to win this game. If that team scores a touchdown, they receive $200!

Heading into this week’s game, the BetMGM new player offer is available for those who want to bet on Raiders vs Broncos. All bettors have to do is wager $10 on either team to win this matchup. Regardless of the outcome of the game, if that team scores a single touchdown in the game, the bet pays out $200. That’s a 20/1 payout just for a touchdown being scored.

Why Bet The Broncos:

✅ The Raiders still don’t have a head coach in place after Jon Gruden resigned due to the email scandal that has rocked this organization. While the Raiders still have some talent on the field, the game planning and chemistry issues that a situation like this can have on a team will hurt them immensely in this game.

✅ Denver has struggled in back-to-back weeks against AFC North opponents in the Ravens and Steelers. This week, they are back at home against a familiar opponent in their division, and they should be able to get back on the right track.

✅ The Broncos are top-10 in the NFL in yards per carry for and against, which should help them control the time of possession in this game. While Derek Carr and the Raiders can be explosive on offense, the pass rush of the Broncos should have opportunities to get after Carr on passing downs thanks to the Denver run defense.

It has been a tumultuous week for the Las Vegas Raiders, as they lost at home to the Chicago Bears before losing their head coach. The Raiders failed to break double digits on the scoreboard against Chicago, before they saw Jon Gruden resign due to the emergence of emails from 2011 in which he used disparaging remarks about several individuals with past and present ties to the NFL along with several groups of people.

This week, the Raiders will have to figure out their operational plan moving forward, while simultaneously dealing with a Denver defense looking to inflict punishment on Derek Carr. After a 3-0 start to the season, the Raiders have lost two straight games, and the wind appears to have gone from their sails between the losses and the Gruden resignation.

The Denver Broncos have also lost two straight games after starting the season with a 3-0 record. Denver has lost in consecutive weeks to the Ravens and Steelers, putting them behind the 4-1 Los Angeles Chargers in the AFC West standings. This week is huge for both the Broncos and Raiders, as a win will put one team ahead of the other in the division standings after Week 6.

For Denver, the defense has not been the problem of late, as the offense of the Broncos has let them down. Over the last two weeks, the Broncos have averaged just 13 points per game, which is rarely enough to get the job done in the NFL today. This week, against a reeling Raiders organization, Denver will look to get their offense back on the right track to get them back into the win column.