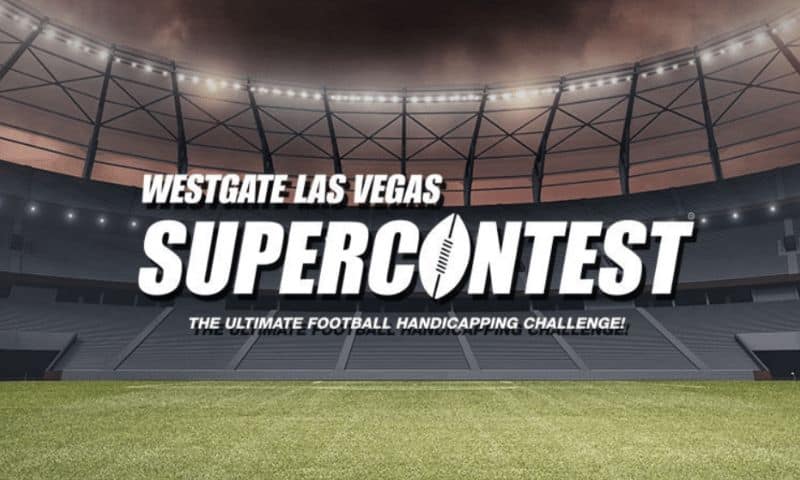 With the fourth quarter already in the books, all that is left to be decided are the full-season prizes in the Westgate SuperContest. The top 100 plus ties will finish in the money for their efforts over 85 picks. All eyes will be on the top spots because that’s where the big prizes reside, but it is never a bad thing to be able to say that you cashed in what has been the premier NFL handicapping contest over the last several years.

ODBMG2 could be sitting on a massive weekend. The team of David Baker and Mark Gregovich heads into Week 17 with the lead in the SuperContest and also the lead in the Circa Sports Million II. The lead is a half-point in each, but there is one really key difference.

Here in the SuperContest, Yugo77 is the entry a half-point off of the pace, but there is a five-way tie for third with 50 points between Tribe Ojibwa, Invisible, Dixon_Cider, Chazman, and CapenJ. In the Circa, the difference between first and 18th is 3.5 points. In the SuperContest, it is the difference between first and third.

Anything can happen in Week 17, as we all know. But there is some additional cushion for ODBMG2 and Yugo77 relative to those that are chasing the top two spots. Depending on how many matching entries there are across those in contention for the win, making up ground could be extremely difficult.

The mindset that goes into Week 17 will have a tremendous impact on how things play out. Some entries will try to go contrarian and a little bit more aggressive. Others will try to hold their ground and play on the stale line value or attempt to mirror the most popular picks as much as possible. Some entries will ignore flat lines that could push and instead focus on half-point lines that will either win or lose. That point is especially true for those outside the money, where a half-point might not do any good.

All the while, along with these game theory decisions, handicappers in this contest also have to sort through the news cycle to see who is playing, who isn’t playing, and also to understand and evaluate the different playoff scenarios, the lines that are forcing contestants to pay a premium, and those that may be underpriced because of a narrative or a perception bias.

Being in a position to make money in Week 17 is the goal in a contest like this, but it is an unenviable task trying to pick sides in this environment with a lot of internal strife and external factors.

The same holds true to an even higher degree in the SuperContest Gold. BrettFavre 444 leads by two points over Invisible 1. There are only six entries that have a chance at being the winner because this is a winner-take-all contest. Those that are farther off the pace than others have to purposely be aggressive and contrarian in hopes of gaining ground.

The toughest decisions likely come for the leader with 52 points. There is no standing pat because only one position gets paid. Putting together the best five-play card is the only goal in hopes of maintaining that lead when all the Week 17 dust settles. First place is worth $360,000 with 72 entrants.

While this week is all about looking at how the tournament is playing out and the cash prizes that will be won, it is also fair to look into the future. The SuperContest was hurt badly by COVID-19, but hurt even worse by the Circa Sports Million. The SuperContest had 3,328 entrants last season and the size of the field had grown every year since 2010.

With the rules already in place before the official number of entrants was decided, more than 9% of the field will finish in the money. Compare that to less than 2% in the Circa and 3.06% of the field last season. As a result, those that finish outside of the top 50, but inside the top 100, will win less prize money than it cost to enter the contest.

Changes will have to be made going forward. The hesitance of potential entrants to travel to Las Vegas to sign up was clearly evident, but also, the Circa got 3,148 entrants in just its second year of existence. The entry fee was $500 cheaper in the Circa and there is no rake. The SuperContest charges an 8% “Admin Fee”, which many just believe to be a rake.

If the Superbook wants to compete with the Circa Million, there will need to be some adjustments. Maybe it would be premature to say that the torch has been reluctantly passed, but it sure looks as though the new kid on the block already rules the neighborhood.

Like so many others, we opted to put our focus on the Circa Million instead of the SuperContest, but we’ve been covering it throughout the season at ATS.io and hope you’ve enjoyed the coverage. It is always interesting to compare the two contests and see how things are playing out with each group. That rings true here in Week 17 as well.

The quarter prizes are finished in the SuperContest, so it’s all about that end-of-season finish. To this point, the field is at 49.38% for the year, with a top-five consensus record of 40-38-3 because the Falcons and Broncos tied for the fifth-most picks in Week 10. One team lost and one team won. We had another top-five tie earlier in the year, but both teams lost, so I counted it as one loss for record-keeping purposes.

The consensus is 110-120-8 on the season. There have only been two winning weeks in the SuperContest since Week 7 and those weeks came in at 50.5% and 51.13%, so they weren’t exactly the kind you’d hang a banner about.

While we didn’t do the SuperContest this year, we have in the past and we could do it again. Whether or not we do, we’ll enter the Circa and that means having Matty and Toni from FootballContest.com as our proxy service. They did an excellent job for us again this season and I have no doubt that they will do an excellent job for you as well. We highly recommend their services. It’s never too early to start thinking about the next football season and if you do not live in the state of Nevada, you will need a proxy to enter picks for you. That means you will need Matty and Toni because they are simply the best at what they do.

Here are the lines, pick counts, and consensus for Week 17 in the SuperContest:

It is worth noting that the Bears make the top five, despite have only three more picks than their opponents, the Packers. Stale line value grabs and teams perceived to be playing their hearts out make up the other top-five consensus picks. The line dropped on the Panthers when the Saints running back room picked up COVID. Otherwise, it is teams with their playoff lives on the line.

Thank you for joining us all season long for our SuperContest coverage! We’ll do this all over again in September!