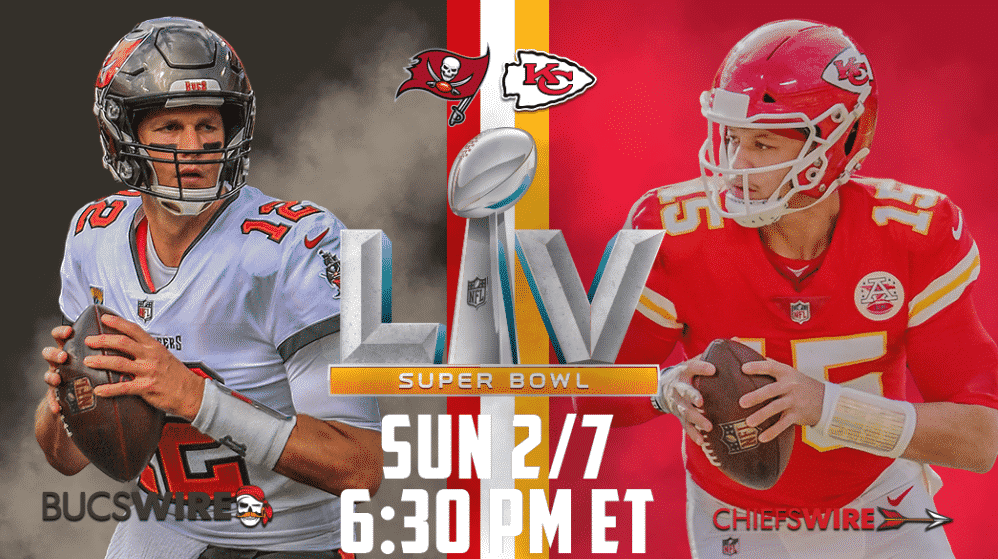 Super Bowl 55 is set and we have one of the best quarterbacks duels we could hope for as the G.O.A.T., Tom Brady, and the Tampa Bay Buccaneers host Patrick Mahomes, someone who may challenge Brady as the G.O.A.T., and the Kansas City Chiefs. This game will take place in Tampa, Florida on Sunday, February 7, 2021 and will be the first time a team plays in their home stadium at the Super Bowl. This game will air live on CBS at 6:30 p.m. EST.

Kansas City is in their second consecutive Super Bowl and loosing to become the first team to win back-to-back Super Bowls since Tom Brady and the New England Patriots in 2003 and 2004. This would be the third Chiefs Super Bowl win in four appearance and their fifth championship overall – the Chiefs won the AFL Championship as the Dallas Texans in 1962.

Tampa Bay is in their second ever Super Bowl and will look to duplicate their winning formula that won them the championship back in the 2002 season. The Bucs rolled over the Oakland Raiders in Super Bowl 37 in their only other appearance.

These two teams have never met in the Super Bowl.

Kansas City hosted the Buffalo Bills in the AFC Championship game and came away with a 38-24 victory, a score that was not indicative of how much the Chiefs dominated. Buffalo went up 9-0 and led by the score at the end of the first quarter, but Kansas City got hot and ended up holding a 38-15 lead late in the fourth quarter. The Chiefs stars balled out and that started with Patrick Mahomes who went 29/38 for 325 yards, three touchdown, and zero interceptions. Tyreek Hill erupted for 172 yards on nine receptions and Travis Kelce hauled in 13 balls for 118 yards and two touchdowns. It was an all-around impressive performance by Kansas City as the defense held Buffalo to 363 total yards and forced one Josh Allen interception.

The Tampa Bay Buccaneers visited the Green Bay Packers and came away with a 31-26 NFC Championship win. It wasn’t pretty, and the Bucs had to hold on, but Tampa rode a 21-10 halftime advantage to the Super Bowl appearance. Tom Brady struggled in the win as he went 20/36 for 280 yards, three touchdowns, and three interceptions on the day. Leonard Fournette rushed the ball 12 times for 55 yards and one touchdown, and Chris Godwin led the Bucs receivers with five receptions for 110 yards. Defensively, Tampa allowed 381 total yards and forced two Packers turnovers, one interception and one lost fumble.

Game Prediction: I like Kansas City to win their second consecutive Super Bowl and the Chiefs -3 to get the cover. I would not be surprised to see this line bet up to four or five points come Super Bowl Sunday.