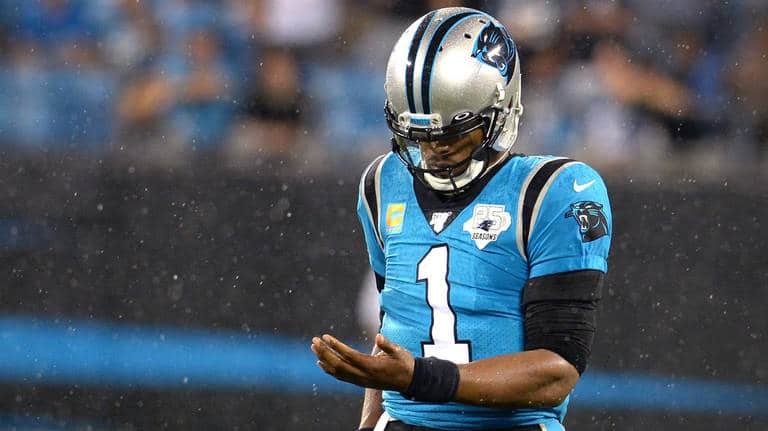 The Carolina Panthers were not favored to win the Super Bowl, the NFC, or even the NFC South when the season began. But they were expected to be a tough competitive team with a real shot of making the playoffs.

Then they lost a tough one to the Los Angeles Rams in Week One– but all was not lost. They just needed to rebound in Week Two with a win at home against a division foe, the Tampa Bay Buccaneers.

Which, they didn’t get.

It is only two weeks into the season, and with so much football left to be played still, anything can happen. However, history has shown that teams that fall to 0-2 at the start of the season rarely make the playoffs. But there were two teams last year that did it (Seahawks and Texans).

So, all is still not lost. In fact, maybe now is the perfect time to get behind the Panthers in the NFC South. With back-to-back losses to start the season, their NFC South Divisional odds are going to be longer which means you can win more should they win the division in the end (via DraftKings as of September 13):

Their defense has not been bad; they held the Rams to just 349 total yards of offense in Week One and held the Buccaneers to 289 total yards. The defense is not an issue; it’s the offense.

Against the Rams, they were not bad (343 total yards). But the Rams are a good team in their own right and won the game. However, from that game, a familiar issue arose.

Cam Newton likes to be the center of attention. He wants to be the reason why the succeeds. If he isn’t the focal point of the team, he is unhappy—and it shows in his demeanor and how he plays. During the week, Newton talked with the media and ‘joked’ about how many touches McCaffrey got in the game (via ProFootballTalk.com):

“I think coach has got C-Mac up for fantasy this week. He picked C-Mac for fantasy. I should have went over and seen who he was drafting in his league. That’s probably why we aren’t doing deep passes. He should pick me first quarterback.”

The assumption is that he was just kidding, but was he? Newton has been the not-so-secret to the success of the Panthers for years. He has embraced that fact and enjoyed it. It is why he has continued to run the ball the way he does.

But he wants to play ‘his’ game; he wants to be the one that makes the play. While he should want to be the guy, he should also be able to stand back and let someone else take that role. That doesn’t seem to be something he is willing to do.

Until he is, he will be holding the Panthers back.

So—how should you bet regarding the Panthers? Do not take them to win the Super Bowl (+6600), the NFC (+3500), or the division. The value is not there; at least not enough to warrant betting on them.