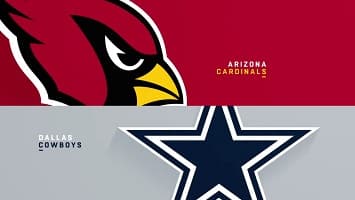 A game that looked much more exciting last weekend is set for Monday, October 19, 2020, when the Arizona Cardinals (3-2) visit the Dallas Cowboys (2-3). The Cowboys lost quarterback Dak Prescott for the rest of the season when he fractured his ankle in horrifying fashion against the New York Giants. This game will air live on ESPN at 8:15 p.m. EST.

Through five games, the Arizona offense is averaging 25.6 points per game and 400.8 yards per game, 259.8 through the air and 141.0 on the ground. Defensively, the Cardinals are allowing 20.4 points and 368.8 yards, 244.6 passing and 124.2 rushing. Kenyon Drake leads the Cardinals with 314 rushing yards and two touchdowns, and DeAndre Hopkins is having a monster season with 528 receiving yards and two touchdowns.

The Dallas Cowboys is averaging 32.6 points per game and 502.2 yards per game, 395.6 through the air and 106.6 on the ground. Defensively, the Cowboys can’t stop anyone as they are allowing 36.0 points and 413.2 yards, 257.4 passing and 155.8 rushing. Ezekiel Elliott leads the Cowboys with 364 rushing yards and five touchdowns, and rookie CeeDee Lamb leads the receivers with 433 yards and two touchdowns.

Below is my best bet for Week 6 action between the Arizona Cardinals at Dallas Cowboys. All lines are from BetRivers Sportsbook.

Last time out, the Arizona Cardinals visited the lowly New York Jets and came away with a 30-10 win. You can’t take anything away from a game against the Jets, but the Cardinals will be happy to have went and gotten their business done easily. Kyler Murray threw for 38- yards, one touchdown, one interception, and ran for an additional 31 yards and one touchdown. Running backs Kenyan Drake and Chase Edmunds combined for 96 yards and two touchdowns. DeAndre Hopkins continued his strong start to the season with a six catch, 131 yards, one touchdown performance.

The Dallas Cowboys hosted the New York Giants and came away with a 37-34 win, but the big story out of this game was the Cowboys losing Dak Prescott for the rest of the season. With Andy Dalton at the helm, the Cowboys were able to kick two field goals in the final two minutes of the game to come away with a big win. Zeke Elliott ran 19 times for 91 yards and two touchdowns, and CeeDee Lamb led all receivers with eight receptions for 124 yards.

Free Picks: I don’t think Andy Dalton is terrible and, with a full week of practice, I still think the Dallas Cowboys win this game.