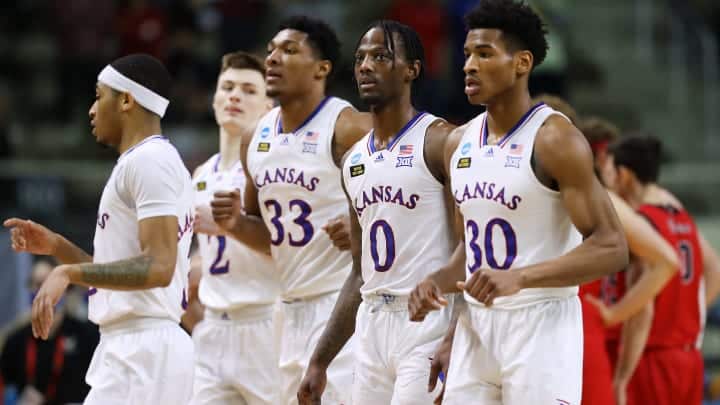 The NCAA Men’s Basketball Championship Second Round wraps up Monday night with the West Region showdown between the No. 6 USC Trojans and No. 3 Kansas Jayhawks, so here’s my best betting pick for this marquee matchup at Hinkle Fieldhouse in Indianapolis.

The Trojans open as slight 1.5-point favorites on BetRivers Sportsbook. They are listed at -120 odds to win straight up, while the Jayhawks are +100 moneyline dogs. USC and Kansas meet for the first time since 2011, and the Trojans are winless in their previous seven encounters with the Jayhawks.

The Trojans had no problems outlasting Drake in the first round

The USC Trojans bounced back from a tough 72-70 loss to the Colorado Buffaloes in the Pac-12 Championship Tournament semifinals. They easily defeated the No. 11 Drake Bulldogs last Saturday, 72-56, covering a 7-point spread.

The Trojans held the Bulldogs to just 29.4% shooting from the field while making 50.0% of their field goals. The Mobley brothers combined for 32 points, 16 rebounds, and four blocks, while Tahj Eaddy had nine points, ten assists, and six rebounds.

Kansas eliminated Eastern Washington thanks to a superb second-half display

The Kansas Jayhawks overcame an eight-point deficit from halftime this past Saturday to record a comfortable 93-84 victory over the No. 14 Eastern Washington Eagles. After missing a couple of games due to the COVID-19, junior forward David McCormack returned to the floor and helped the Jayhawks with 22 points and nine rebounds.

McCormack’s appearance was a huge boost for the Jayhawks’ frontcourt, but they still miss sophomore Jalen Wilson (12.1 PPG, 8.2 RPG). Kansas struggled defensively in the first round and needs to improve, though the Jayhawks have won eight of their last nine games overall along with the forfeit in the Big 12 Tournament semifinals.

This should be a very tight contest, so if you want to take the risk, grab any team to win by five or fewer points at +160 odds. Both USC and Kansas lean on a stout defense and are pretty inconsistent offensively, especially against solid defensive teams.

USC will look to dominate Kansas in the paint, while the Jayhawks will try to speed up things a bit. Kansas could easily struggle in the frontcourt, but I think they will have enough firepower to keep it close down the stretch. USC struggles mightily from the charity stripe, making only 64.5% of their free throws (326th in the nation).

As I’ve said, both teams will be aggressive on the defensive end. USC will look to feed Evan Mobley in the paint, and the Trojans average 67.0 possessions per 40 minutes (239th), so they won’t mind playing half-court basketball all night long.

Four of USC’s last six games produced fewer than 134 points in total, as well as six of the Jayhawks; previous eight contests overall. Give me the under on the totals.