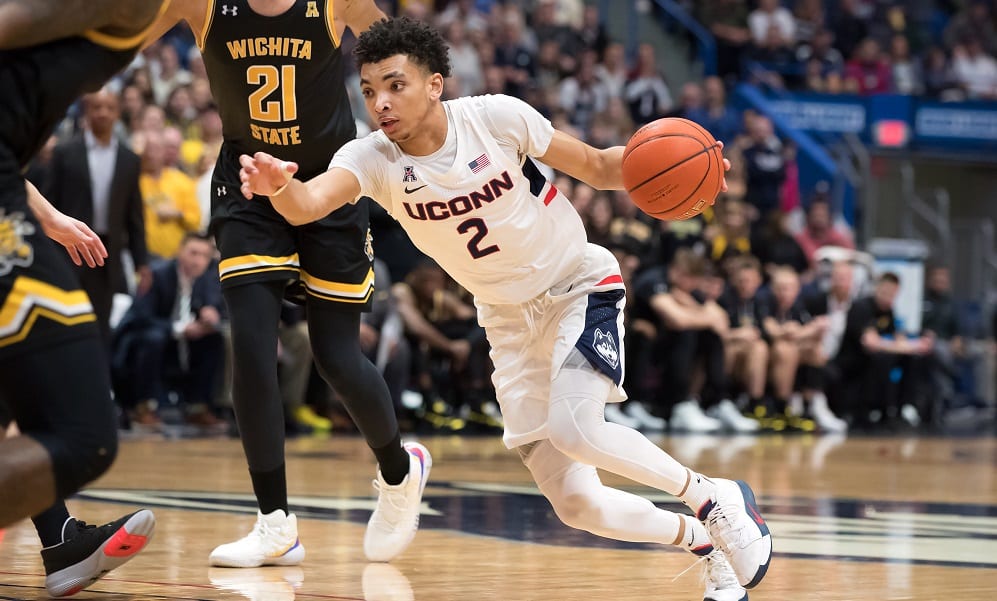 The college basketball betting action continues on the first day of December with the Roman Legends Classic at Mohegan Sun Arena in Uncasville, Connecticut, as the UConn Huskies take on the Vanderbilt Commodores.

The Huskies will play in their neighborhood, searching for their fourth straight victory over Vanderbilt. The Commodores are slight underdogs here, but they opened the season on the right foot and will be keen to upset the odds against UConn.

The Huskies have easily won their first two games

UConn opened the 2020-21 college basketball season with a couple of comfortable victories over the Central Connecticut Blue Devils 102-75 and the Hartford Hawks 69-57. The Huskies covered a 26.5-point spread against the Blue Devils, but they failed as 23.5-point favorites against the Hawks.

Still, UConn had no problems outlasting Hartford, leading by as many as 19 points and controlling the game for all 40 minutes. They shot 44.4% from the field while allowing the Hawks to make just 32.0% of their field goals.

The Commodores look for their second straight win

Vanderbilt tipped off the new season with a 77-71 victory over the Valparaiso Crusaders this past Friday. The Commodores entered the clash as 6-point home favorites, so they are now 4-5-1 ATS over their last 10 games overall.

Last season, the Commodores went 11-21 and finished bottom of the Southeastern Conference with a poor 3-15 record in the conference play. Vanderbilt has won just four of its last 20 games overall.

The Commodores lost 19 of their last 20 games away from home, going 11-9 ATS in that span. Still, they are 4-5 ATS in the last nine outings as underdogs. Vanderbilt is not a bad team, but the Commodores are playing in one of the toughest conferences in the country.

The Huskies should win this game, as they are a well-balanced team with great depth. Covering the spread could be a tricky job, but UConn will feel like home at Mohegan Sun Arena, so I’m taking the Huskies to get the job done.

Pick: Take UConn and the points

The over has hit in 10 of UConn’s last 12 contests overall and seven of the Huskies’ last nine outings as favorites. They like to play at a steady pace and often execute well offensively. Last season, they had the 64th-best scoring offense and the 59th-best scoring defense in the country.

On the other side, the Commodores’ last five games went in the over. Their defense was allowing 104.5 points per 100 possessions last season (221st in the country).

Hereof, betting on the over seems like the logical move. The Commodores played at a fast pace last season, and they could try to speed up the tempo here.