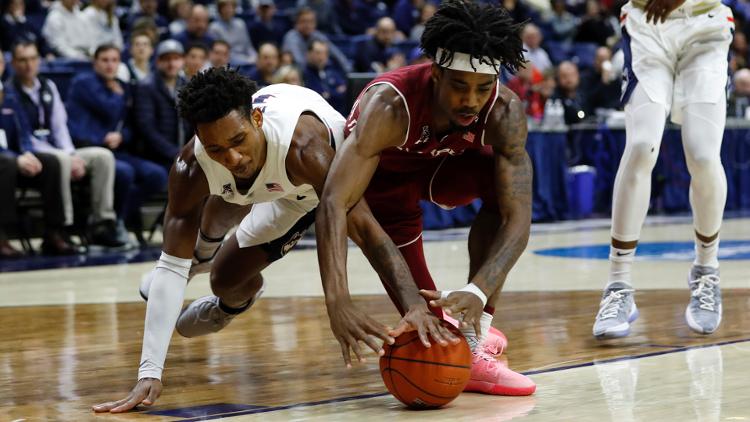 The last time the Huskies played, they beat the Memphis Tigers, 64-61. The Huskies knocked down 18 of their 20 free throws (90.0 percent) and had a turnover percentage of 13.8 (better than their season average of 17.3). UConn was led by Christian Vital, who was the top scorer from either team with 23 points on 5-for-15 shooting.

The Owls lost big to the No. 15 Villanova Wildcats in their last outing, 76-56. Villanova’s 0.602 effective field goal percentage was their largest advantage over Temple, who had a mark of 0.383. The Wildcats’ mark was above their season average of 0.517, while the Owls’ was below their season average of 0.469. Temple’s Nate Pierre-Louis finished with 16 points and 11 rebounds in the game.

The inefficient offense of Temple will battle against the elite defense of UConn. The Owls rank 301st in offensive efficiency, while the Huskies are 42nd in defensive efficiency. The Huskies figure to have the advantage on that side of the ball.

Both teams have had a player take their game to the next level over their last five games. James Bouknight (19 points,2.0 steals) has been great for the Huskies while Quinton Rose (19 points,6.4 rebounds,4.2 assists,2.2 steals,1.2 blocks) has contributed greatly to the Owls.

This will be the second game of the season between these two teams. Vital had 15 points and 10 rebounds in the first game, in which the Huskies defeated the Owls 78-63. The Huskies knocked down 28 of their 30 free throws (93.3 percent) and had a much better turnover percentage (11.7 vs. 19.6).

The Huskies’ average margin of victory in their last five games has been 1.8, down from 5.0 for the season.