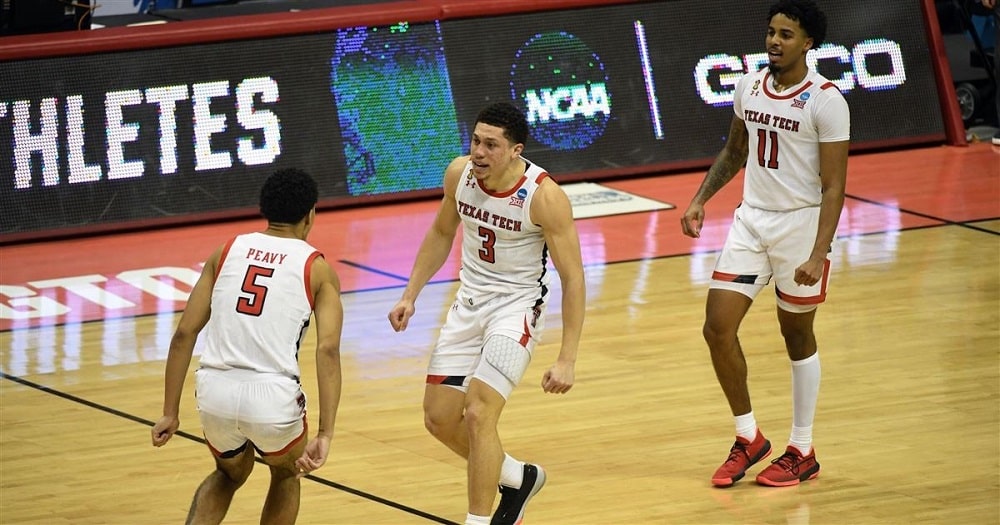 The second round of the 2021 March Madness starts on Sunday, March 21, so here’s the best betting pick for the South Region clash between the No. 6 Texas Tech Red Raiders and the No. 3 Arkansas Razorbacks Illini at Hinkle Fieldhouse in Indianapolis.

These rivals have met on four occasions recently, and each team secured two wins. According to PointsBet Sportsbook, the Red Raiders are slight 1-point favorites to get a victory and advance to the Sweet 16 where they could face the winner of the tilt between Florida and Oral Roberts.

The Red Raiders controlled the second half and beat the Aggies

Texas Tech secured its 18th appearance in the Big Dance and third in a row. They reached the National Championship in 2019, which was their first Final Four appearance in the school’s history, but lost to Virginia in overtime. It’s going to be hard to repeat that success, especially with the red-hot Baylor in the South Region.

This season, Texas Tech is the 131st team in college basketball when it comes to the offense as they average 72.7 points per game, while they are 24th on defense with 63.0 points allowed per contest.

McClung is the team’s top scorer with 15.8 points per game. Shannon Jr. averages 12.6 ppg, 4.0 rpg, and 1.1 spg, while Edwards and McCullar are averaging around ten points per contest.

The Razorbacks grabbed a comfortable win over the Raiders

The Arkansas Razorbacks recorded an easy 85-68 win over the Colgate Raiders thanks to an excellent second half and 49 points they scored in that period. Although Colgate was better in rebounds (42-37) and assists (17-11), the Raiders committed even 22 turnovers opposite Arkansas’ ten.

Senior forward Justin Smith had a game of his career as he posted a double-double of 29 points and game-high 13 rebounds, along with game-high five steals and two blocks. Jalen Tate had 15 points, seven boards, and four assists, JD Notae chipped in with 14 points, five rebounds, and three thefts off the bench, while Moses Moody and Davonte Davis scored 12 points each.

This year, Arkansas has the 7th offense in the country that averages 82.5 points per game, while their defense is 190th as they allow 70.6 points per contest. The Razorbacks are in the top 20 when it comes to rebounds (39.9).

Texas Tech did play in the National Championship last time out, but I don’t think they are good enough to repeat that success this year. In fact, I don’t believe they will get past this opening round. Arkansas has been in a better form throughout the season, and even though they are slight underdogs here, I am backing the Razorbacks to get a win. It’s going to be a close one, and I wouldn’t exclude overtime.

We’re dealing with the two efficient teams, especially Arkansas, who has a top 10 offense that scores over 80 points per game. I expect to see a tight duel that could go to the wire, so I am going with Over in this one. The total has gone Over in five of Arkansas’ last six games when playing as the underdog.