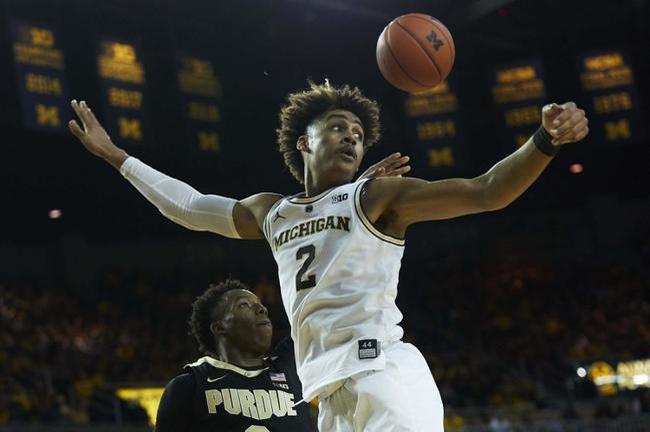 In the Boilermakers’ last outing, they were thoroughly outplayed by the Illinois Fighting Illini, 63-37. Illinois’ 0.518 effective field goal percentage was their largest strength over Purdue, who had a rate of 0.275. The Fighting Illini’s mark was above their season average of 0.515, while the Boilermakers’ was below their season average of 0.494. Purdue’s Nojel Eastern had a solid game, finishing with six points and six rebounds.

The Wolverines were blown out by the No. 14 Michigan State Spartans in their last outing, 87-69. Getting to the charity stripe was one of Michigan State’s biggest advantages. They made 33 trips to the line, while Michigan went 22 times. With 14 points, eight assists and five rebounds, Zavier Simpson put together a solid game for Michigan.

After the Wolverines won the sole game against the Boilermakers last season, 76-57, this will be the first matchup of the year between these two teams. One of Michigan’s biggest advantages was their ability to convert at the free throw line. They were 11-13 (84.6 percent), while the Boilermakers were just 4-6 (66.7 percent).

The game should be a matchup of strength against strength as the prolific offense of Michigan (38th in the nation with an offensive efficiency of 110.9) takes on the stingy defense of Purdue (30th in the nation with a defensive efficiency of 89.0). Also, the Boilermakers, who rank 324th in free throw attempt (FTA) rate (0.169), could struggle to get to the line against the Wolverines, who rank 47th in opponents’ FTA rate (0.166).

Michigan averages 4.9 blocks per game, which ranks 32nd in the NCAA. Purdue ranks 94th in blocks allowed per game (3.3).

The Boilermakers’ average margin of victory in their last five games has been 4.6, down from 9.1 for the season.