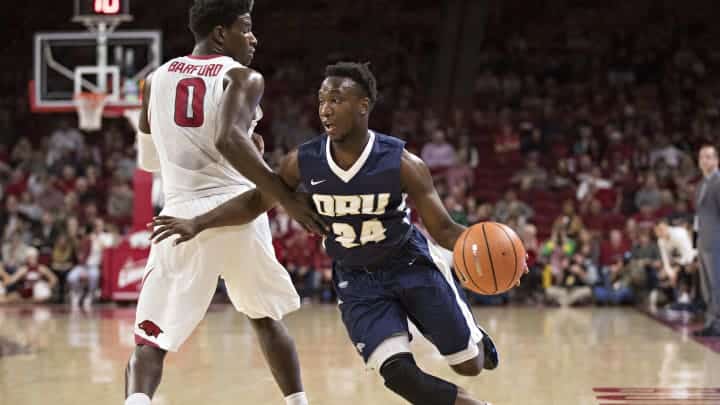 The No. 15 Oral Roberts Golden Eagles meet the No. 7 Florida Gators in the second round of the 2021 NCAA basketball championship, so here’s my best betting pick for their South Region showdown at Indiana Farmers Coliseum in Indianapolis.

The Gators opened as firm 8-point favorites with a total of 149.0 points on BetMGM Sportsbook. They meet Oral Roberts for the first time ever, and the Gators should be ready for a tough challenge, as the Golden Eagles pulled off a massive upset in the first round.

The Oral Roberts Golden Eagles were listed as 15-point underdogs in their first-round matchup with Ohio State, but they didn’t care a lot about it. Led by junior forward Kevin Obanor and sophomore guard Max Abmas, the Golden Eagles stunned the Buckeyes in overtime, 75-72, and fully deserved to win.

Obanor posted a double-double of 30 points and 11 rebounds, while Abmas added 29 points, five rebounds, and three assists. The rest of the pack failed to hit double digits, but sophomore guard Carlos Jurgens had a great game and posted a line of six points, six assists, and five steals.

The Golden Eagles’ dynamic duo dominated the Summit League all season. Obanor was tallying 18.6 points and 9.5 rebounds per game, while Abmas was adding 24.5 points and 3.7 assists a night. Oral Roberts ranks 71st in the country in offensive efficiency, posting 108.6 points per 100 possessions.

The Florida Gators entered March Madness with three losses in their last four outings. They were listed as slight 1.5-point underdogs in the first round, but the Gators found a way to outlast the Virginia Tech Hokies in overtime, 75-70.

Florida rallied from a six-point deficit on the back of junior forward Colin Castleton and sophomore guard Tre Mann. Castleton dropped 19 points on the Hokies and posted 14 rebounds, while Mann had 14 points and four assists, making a crucial 3-pointer with 23 seconds left in overtime.

The Gators are without Keyontae Johnson who’s done for the season after collapsing on the court in December 2020, so Castleton and Mann lead the way for Florida, combining for 28.2 points and 11.8 rebounds a night.

The Gators are not an elite defensive team, though they play aggressively thanks to a great depth. Florida allowed 21 free-throw attempts in the previous round, while the Hokies made just seven of their 23 attempts from deep. Oral Roberts leads the nation in free throw percentage (82.2%) and 3-points made per game (11.3). Therefore, I’m backing the Golden Eagles to cover.

Florida will pressure the ball all night, and Oral Roberts doesn’t have enough depth which seems like a big issue. On the other hand, both Abmas and Obanor are used to play a lot of minutes, and I’m expecting them to torture the Gators’ defense.

Of course, I would be shocked if Oral Roberts knock down another elite school, but the Golden Eagles certainly possess the talent to make this game interesting to watch. Their defense will be a problem, especially down the stretch. Still, the Gators are 4-16 ATS in their last 20 showings as favorites of eight or more points.

The over is 7-3 in Oral Roberts’ last ten games overall, and it is 6-1 in the Golden Eagles’ previous seven appearances as underdogs. They average 71.6 possessions per 40 minutes, playing at the 46th-fastest pace in the country.

On the other side, Florida records 68.4 possessions per 40 minutes (174th), but the over has hit in just three of the Gators’ last ten showings. The line seems pretty high at 149.0 points, and I would go with the under. The Gators don’t want to rush things against Oral Roberts, as the Eagles will certainly push the ball in transition and attack the rim whenever they can, looking for some easy baskets from the charity stripe.