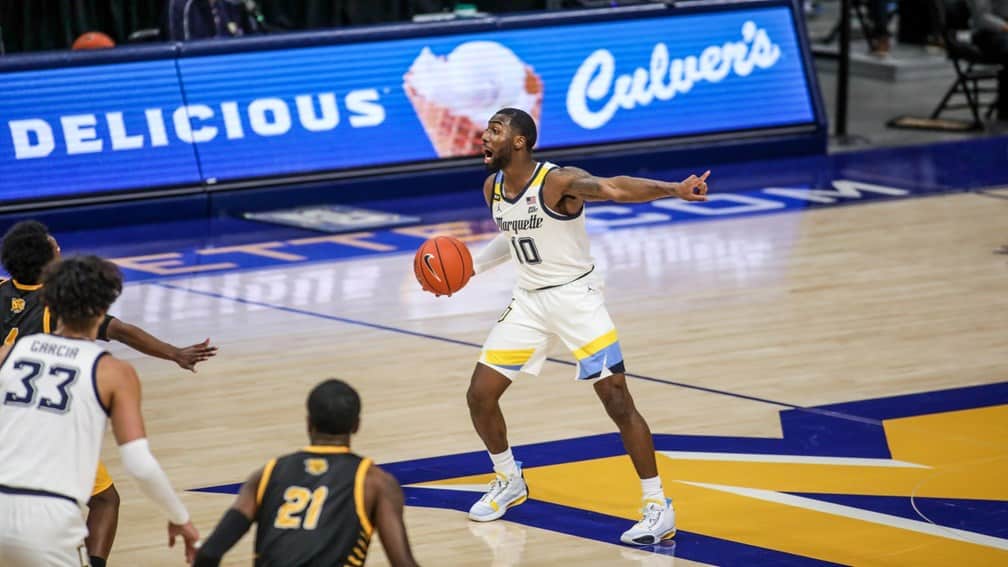 The Oklahoma State Cowboys and Marquette Golden Eagles will face off against each other in the Big East-Big 12 Battle at Fiserv Forum in Milwaukee, Wisconsin, on December 1, 2020.

These two schools haven’t met since 2007 when the Golden Eagles embarrassed the Cowboys as 3.5-point favorites, beating them 91-61. Both teams opened the 2020-21 CBB season with a couple of wins, so we should see a great game Tuesday in Milwaukee.

The Cowboys enter their first big clash of the season

The Oklahoma State Cowboys had an easy job in their first two outings of the season. They beat the UT Arlington Mavericks 75-68 as 10.5-point road favorites and the Texas Southern Tigers 85-65 as 19.5-point home favorites.

The Cowboys are undefeated in six straight games overall after finishing the previous season on a four-game win streak. They went 18-14 overall and 7-11 in the conference play, finishing at the eighth spot of the Big 12 standings.

Freshman Cade Cunningham led the way for the Cowboys through the first two contests this term. He averaged 20.5 points, 7.0 rebounds, and 3.5 assists per game, while junior Isaac Likekele tallied 8.5 points, 9.5 boards, and 5.5 dimes per contest.

The Golden Eagles stay home, looking to extend their streak

The Marquette Golden Eagles opened the season with a couple of home wins. They dismantled the Arkansas-Pine Bluff Golden Lions 99-57 as 31.5-point favorites and the Eastern Illinois Panthers 75-50 as 14.5-point favorites.

Although none of their first two rivals was a proper benchmark, the Golden Eagles played very well on both sides of the ball. Freshman Dawson Garcia led the way, averaging 17.5 points and 6.0 rebounds per game, while four more guys averaged points in double figures.

Last season, the Golden Eagles were 18-12 and just 8-10 in the conference play which was a huge disappointment. They finished sixth in the Big East, five games behind the co-champions Creighton and Villanova.

The Golden Eagles are fired up to prove their worth this season with a little help from a few freshmen. Last season, the Eagles had the 14th-highest scoring offense per 100 possessions in the country (114.0), but their defense was a problem. This time, they look like a much better defensive team, so I’m backing them to cover.

The Cowboys, on the other side, lost their top two scorers from the previous season. They will need some time to gel things, especially on the defensive end. Oklahoma State had a top-50 defense last year, but the Cowboys don’t look like the same team.

Pick: Take Marquette and the points

The betting trends won’t help a lot here, as both Oklahoma State and Marquette have been pretty much hit-or-miss when it comes to the totals lately. Four of Marquette’s last seven games went in the under, as well as three of Oklahoma State’s previous contests.

The Golden Eagles prefer to play at a fast pace and will look to push the ball in transition whenever they can. The Cowboys are still trying to pick up the pieces defensively, so I’m betting on the over.