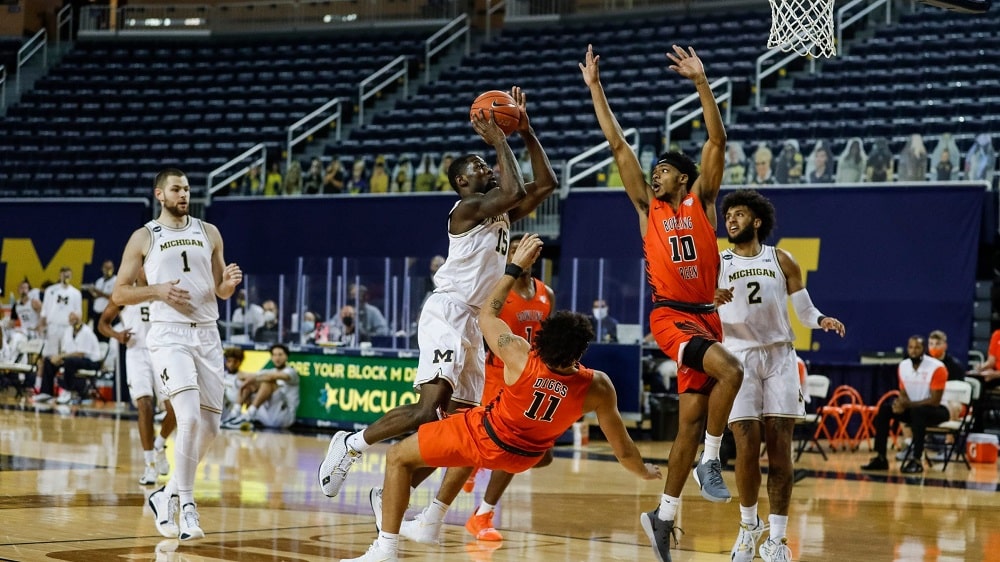 The 2020-21 college basketball season has just started, but it’s time to wrap up the opening week with the non-conference showdown at Crisler Center in Ann Arbor, Michigan, where the Michigan Wolverines welcome the Oakland Golden Grizzlies.

Of course, the Wolverines will take the floor as massive favorites to beat the Grizzlies, while these two teams haven’t met since 2011 when Michigan outlasted Oakland 90-80 on the road.

The Grizzlies are on a tight schedule

The Grizzlies opened with an embarrassing 101-49 defeat at the Xavier Musketeers. They scored only 12 first-half points while allowing 53 in a return. The Grizzlies shot miserable 23.2% from the field, while their opponents made 60.6% of their field goals.

Oakland suffered another tough loss in its second outing of the season. The Golden Grizzlies were beaten by the Toledo Rockets 80-53 while making only two of their 23 attempts from beyond the 3-point line.

Head coach Greg Kampe marks his 37th season at Oakland’s helm. The Grizzlies went 14-19 last year and finished at the sixth spot of the Horizon League table thanks to an 8-10 record in the conference play.

The Wolverines look for a drastic improvement

The previous regular season was quite painful for the Michigan Wolverines. They went 19-12 overall and only 10-10 in the conference play to finish at the ninth spot of the Big Ten standings. It was a tough first year for head coach Juwan Howard, but the Wolverines will try their best to improve this term.

Michigan tipped off the new season with a 96-82 home victory over the Bowling Green Falcons this past Wednesday. The Wolverines narrowly covered a 13.5-point spread, but it was a good game for Juwan Howard’s boys in general.

They outrebounded the Falcons (44-34) while making 54.1% of their field goals and 37.0% of their 3-pointers. The Wolverines handed out 23 assists, as their offense looked fluid, and senior guard Mike Smith led the way with 16 points and eight dimes.

The Wolverines are undefeated in six straight encounters with the Golden Grizzlies, and that trend will undoubtedly continue Sunday night. The Grizzlies are limited on both sides of the ball and will have a mountain to climb at Crisler Center.

Last time out, Oakland was trailing by 15 points at halftime against the Bradley Braves. Therefore, I suggest you take the Wolverines to cover even though the spread will be huge.

Pick: Take Michigan and the points

Under Juwan Howard, the Michigan Wolverines are trying to play at a fast pace and push the ball in transition. There are a few newcomers on their roster, so I expect the Wolverines to show no mercy Sunday and put on a strong performance for all 40 minutes.

The over has hit in four of the Wolverines’ last five games at home. On the other side, the over is 8-5-1 in Oakland’s previous 14 outings overall.

The Golden Grizzlies could struggle with fatigue, but they have nothing to lose here, so I expect to see a solid shooting night by Oakland to help this game finishes in the over.