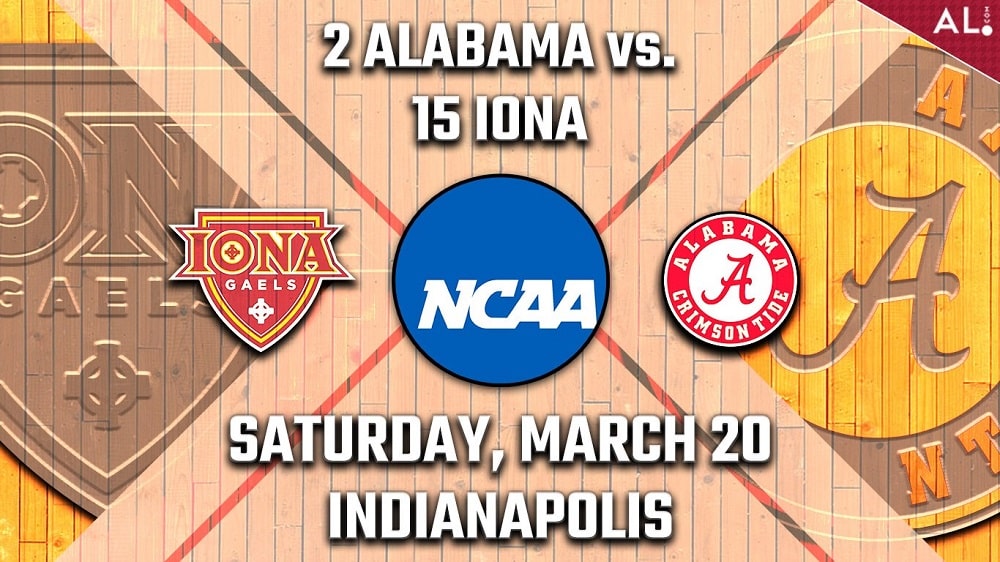 The first round of the 2021 NCAA men’s basketball championship closes down Saturday, March 20, so here’s the best Iona Gaels vs. Alabama Crimson Tide betting pick, as these two schools meet each other for the second time ever.

Back in 1989, the Tide beat the Gaels by 39 points, 78-39. According to William Hill Sportsbook, Alabama opens as a massive 16.5-point fave for Saturday’s clash at Hinkle Fieldhouse in Indianapolis, while the totals are set at 147.5 points.

The Gaels hope to finally get through the first round

The Iona Gaels made it to the Big Dance for the fifth straight time, but they couldn’t reach the second round on any of their previous four appearances. This time, with Rick Pitino at the helm, the No. 15 Gaels hope to finally upset the odds.

Iona clinched its spot in the bracket as the Metro Atlantic Athletic Conference champions. The Geals beat the Fairfield Stags 60-51 in the MAAC Championship Final, dominating their rivals on both sides of the ball, while senior guard Asante Gist led the way for Iona with 18 points and four rebounds.

The Crimson Tide are listed at +1600 to win it all

The No. 2 Alabama Crimson Tide enter March Madness with high hopes after dominating the Southeastern Conference. Nate Oats’ boys finished the regular season atop of the standings with a 16-2 record, while they won the SEC championship tournament after an 80-79 victory over the LSU Tigers in the finals.

Despite a massive double-digit spread, I’m looking for Alabama to dominate this game, especially on the defensive end, and cover on its way to the East Region second round. The Tide possess great depth and love to be aggressive for all 40 minutes, so I don’t think the Gaels will have enough firepower to deal with their opponents.

Iona will need a great shooting night to keep it close, and I’ve already mentioned how good Bama is when it comes to defending the 3-point line.

Alabama plays at the ninth-fastest pace in the country, averaging 73.9 possessions per 40 minutes. On the other side, Iona records 68.3 (185th in the nation), and the Gaels will certainly try to slow down things.

The under is 4-1 in Iona’s last five outings, and it is 5-2 in Alabama’s previous seven games overall. I would stick with these betting trends, as the Tide could easily shut down the Gaels and hold them below 70 points.