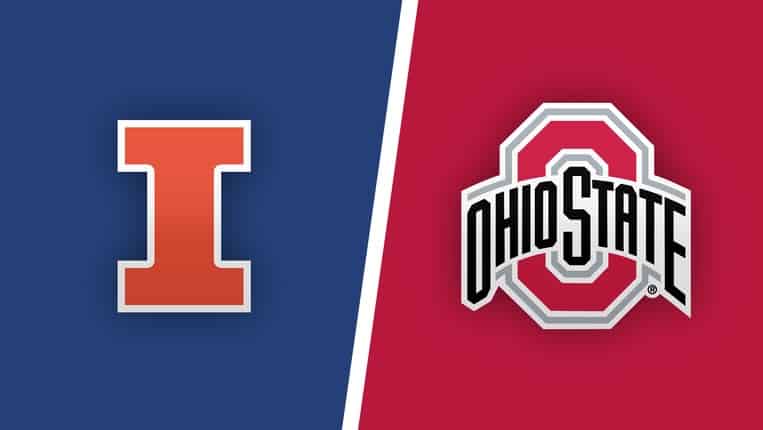 It is a Top 10 showdown between two of the Big Ten’s best teams when the Illinois Fighting Illini take on the Ohio State Buckeyes on Saturday. Get the latest odds and information for this contest at PointsBet Sportsbook.

The Illinois Fighting Illini (19-6, 15-4 and Big Ten) rolled into Ann Arbor and crushed Michigan on Tuesday, 76-53. The Illini took an 11-point lead heading into the half, stymieing Michigan’s offense, holding them to 22 points and 32.1% shooting before the break. Illinois shot 53.1% in the second half and finished at 46.9% from the field.

Illinois is one of the best shooting teams in the country, averaging 81.0 points per game, 19th overall. They are ninth in shooting at 49.9% and 19th in three-point shooting at 38.3%.

Ayo Dosunmu leads the team in scoring at 21.0 ppg, but he is listed as questionable for Saturday’s game. He has missed the last three games with a nasal fracture, and the team will likely sit him to prepare for the tournament.

The Ohio State Buckeyes (18-7, 12-7 in Big Ten) look to snap a three-game losing streak. There is nothing worse than coming into the tournament on a skid, but that is the case as they lost their third straight game to Iowa on Sunday, 73-57. The Buckeyes turned the ball over 15 times and held the lead in this game for just 30 seconds.

The Buckeyes are a quality shooting team themselves, 54th in the country at 77.2 ppg. They are shooting 46.3% from the field, 66th overall, and 36.4% from the three-point range, 62nd. They have been great from the free-throw line, connecting on 77.3% of their attempts, 25th overall.

Liddell leads the team in scoring at 15.9 ppg and he is the leading rebounder at 6.7 per contest. Duane Washington is close behind at 15.3 points per game.

The loss of Dosunmu is obviously a big one, but the team has been playing well even with him out. That includes a crushing victory over the Wolverines in Ann Arbor. This team is extremely good, and it is going to be tough to beat them even without their star player.

Ohio State is struggling right now. They are making too many mistakes and are costing themselves games. Not the kind of thing you can do against a team like Illinois. The road team has won four of the last five meetings between these teams.

With two of the best shooting teams in college basketball, 150 points does not seem like that big of a total. The last time these teams met they combined for 168 points, which was just six weeks ago. No reason to think they cannot put up numbers like that again.