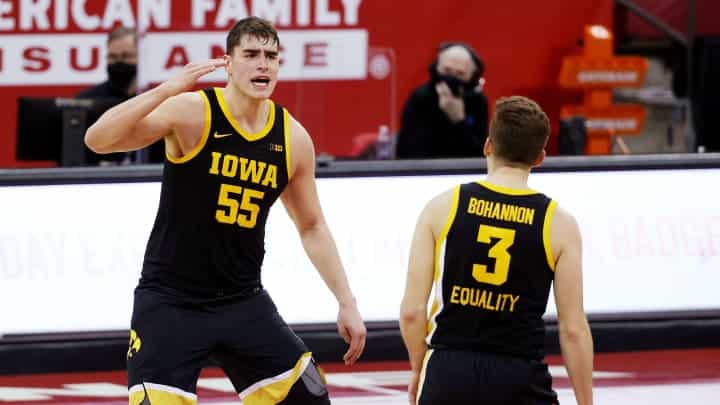 The No. 15 Grand Canyon Antelopes and No. 2 Iowa Hawkeyes will lock horns in the NCAA Championship West Region First Round, so I’ve prepared the best betting pick and odds for their Saturday night’s showdown at Indiana Farmers Coliseum in Indianapolis.

The Antelopes reached the Big Dance for the first time in school’s history. They’ve never met the Hawkeyes before, and the Lopes open as huge 14.5-point underdogs for Saturday’s contest on DraftKings Sportsbook, so let’s see what’s the best wager here.

The Grand Canyon Antelopes finished the regular season as the best team in the Western Athletic Conference, tallying a 17-6 record overall and 9-3 in the conference play. In the WAC championship tournament, the Lopes beat Seattle 81-47 in the semis and New Mexico State 74-56 in the final to clinch their spot in March Madness.

Senior center Asbjorn Midtgaard is leading the way for the Antelopes, notching 14.0 points and 9.9 rebounds per game. Sophomore PG Jovan Blacksher is tallying 11.9 points and 5.3 assists per contest, while senior forward Alessandro Lever is adding 13.3 points and 5.4 boards a night.

The Iowa Hawkeyes ended the regular season as the third-best team in the Big Ten Conference behind Michigan and Illinois, going 21-8 overall and 14-6 in the conference play. They beat Wisconsin 62-57 in the Big Ten championship tournament quarters but lost to Illinois 82-71 in the semifinals.

Senior center Luka Garza is a key guy in this Iowa team. He’s averaging 23.7 points and 8.8 rebounds per game while making 54.7% of his field goals and 40.7% of his 3-pointers. Junior guard Joe Wieskamp is posting 14.7 points and 6.6 boards a night, while senior guard Jordan Bohannon is adding 10.9 points and 4.5 assists per contest.

The Hawkeyes have improved defensively over the last few weeks after having some huge problems for most of the regular season. Their offense has been one of the best in the nation all season long, so I’m backing the Hawkeyes to outlasted Grand Canyon by 15 or more points.

On paper, the Antelopes look like an excellent defensive team. However, they played some mediocre competition in the Western Athletic Conference, and slowing down the Iowa Hawkeyes will be a completely different challenge.

As I’ve already mentioned, the Antelopes rely on their stout defense, and the under has hit in eight of their last 11 games overall. Also, the under is 6-3 in Grand Canyon’s previous nine showings as a double-digit underdog.