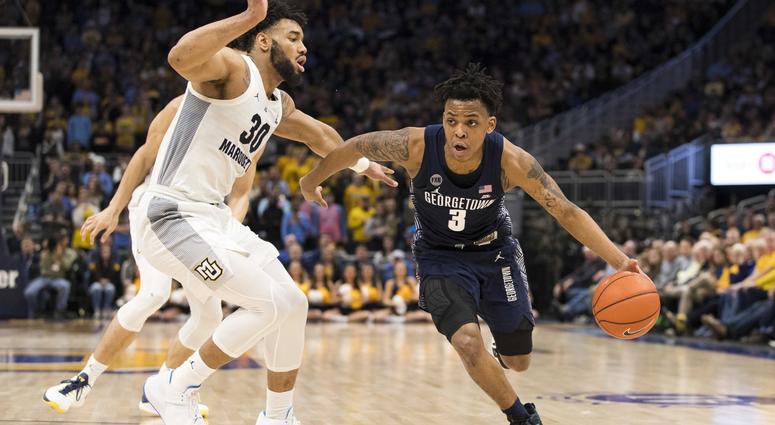 The Hoyas are hoping for a better outcome after their 74-68 loss to the DePaul Blue Demons in their last contest. DePaul’s turnover percentage was their biggest advantage over Georgetown. The Blue Demons had a rate of 11.4 (better than their season average of 17.6), while the Hoyas posted a mark of 17.1. Terrell Allen was the top scorer from either team with 21 points on 7-for-14 shooting.

The last time the Golden Eagles were in action, they fell to the Providence Friars, 84-72. Providence’s turnover percentage was the team’s biggest advantage over Marquette. The Friars posted a mark of 15.2 (stronger than their season average of 16.3), while the Golden Eagles had a rate of 22.4 (above their season average of 16.2). Markus Howard put together a good performance for Marquette, leading both teams in scoring with 38 points on 10-for-25 shooting.

This is the second game of the season between these two squads. In the first, Howard scored a game-high 42 points and the Golden Eagles defeated the Hoyas 84-80. The Golden Eagles had a better turnover percentage (7.6 vs. 10.8) and had a much better offensive rebounding percentage (35.1 vs. 28.1).

The Hoyas average 38.9 rebounds per game, which ranks 40th in the NCAA. The Golden Eagles rank 172nd in rebounds allowed per game (35.7).

Georgetown averages 15.1 assists per game, which ranks 31st in the country. Marquette ranks 151st in assists allowed per game (12.9).