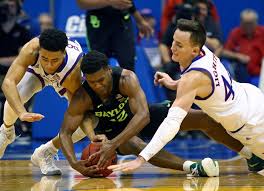 The most anticipated game of the College Basketball season takes us to Waco, Texas as the #3 Kansas Jayhawks (23-3 overall and 12-1 in the Big 12) go on the road to face the #1 Baylor Bears (24-1 and 13-0) in a game that could decide the Big 12 regular season champions. The Big 12 race is down to just these two teams and with only five games left to play this game has an incredible amount of importance.

Kansas enter this weekend ranked #3 in the country and are just one game back of the Baylor Bears. The Jayhawks only Big 12 loss this season was a home loss to the Bears early in conference play. The race won’t be over if Kansas loses this weekend, as the Jayhawks should roll through their last four opponents, but it will make it very hard for Kansas to start a new Big 12 streak. According to Joe Lunardi’s February 21, 2020 Bracketology, Kansas would the #1 seed in the Midwest region and would play #16 seed Radford in Omaha.

Baylor remain the top ranked team in the country and still have not lost a game since falling to Washington in the Armed Forces Classic back in early November. The Bears are undefeated in Big 12 play and are in a great spot to win their first Big 12 regular season title with a win Saturday. Baylor would be the top overall seed in the tournament and would play either Prairie View A&M or Norfolk State in Omaha.

Below is my best bet for #3 Kansas at #1 Baylor. All odds are from DraftKings.

Kansas prepared for this big game by hosting lowly Iowa State and the Jayhawks came out firing as they cruised to a 91-71 win Monday night. The Jayhawks won both halves by 10 points and the game never got closer than five points in the second half. Kansas has now won 11 straight games, since their loss to Baylor, and will bring an 8-1 road record to the Ferrell Center Saturday. Kansas is 16-10 against the spread and the under has hit in 17 of their 26 games this season.

Baylor led by as much as 13 and cruised to a comfortable 65-54 win over a solid Oklahoma team Tuesday night. The Bears went into Norman in a prime look ahead spot, but handled themselves like the true #1 team they are and handled their business. Baylor has now won 23 straight games and will welcome Kansas to the Ferrell Center where the Bears have a perfect 12-0 record. Baylor is 17-8 against the spread and the under has hit in 15 of their 25 games this season.

Series History: Kansas and Baylor have met 33 times in the past and the Jayhawks have dominated the Bears 27-6. Baylor came away with a win at Kansas when they two played in early January.

Prediction: Give me Kansas to go into Waco and come away with the big road win.