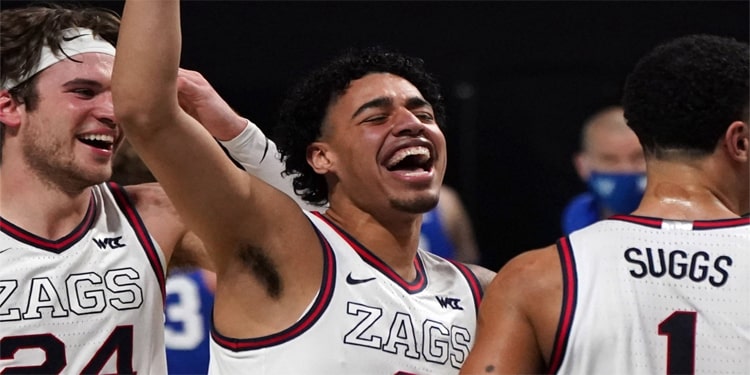 The Gonzaga Bulldogs are atop the West Region as the #1 overall seed for the 2021 NCAA Tournament. It sure looks as though the Bulldogs have been rewarded with the easiest draw and the best path to the Final Four, which is the way that it should be for the nation’s top team.

Gonzaga is the undisputed leader of the region heading into play on Saturday March 20, as the NCAA Tournament will have a bit of a different format and all games will be played inside the Indianapolis bubble with games at several different locations across the city.

Now is a great time to sign up for a legal US sportsbook if you are in a state that has embraced the wide world of sports betting. Check out our top US sportsbooks and sign up today!

Betting odds came out basically right as the brackets were announced on Selection Sunday. Let’s look at what those look like for the first round of games on Saturday (lines from BetMGM Sportsbook):

Gonzaga draws the winner of Norfolk State and Appalachian State in the 16 vs. 16 First Four play-in game on Thursday. The Bulldogs will be a huge favorite over either team in the -30s.

The Selection Committee was not overly impressed with Missouri’s performance this season and put the Tigers on the 9 line. The winner of this game will be eliminated in the next round, but nobody wants to be one and done in the NCAAT. Oklahoma lost four of five to end the season, so we’ll see if Missouri money comes in.

The UC Santa Barbara Gauchos have taken the early money here to bump this line down from -8 to -6.5. Creighton is a jump shooting team and can be something of a high-variance squad. They also wrapped up the regular season amidst some controversy after Greg McDermott was suspended for a game and volunteered to resign after using a racist analogy with his players.

Creighton has to play this game at Lucas Oil Stadium and we saw scoring depressed in the Big Ten Conference Tournament. Don’t be surprised if the total comes down here either.

The markets are betting against Virginia early on with a move down from 10.5 to 7.5 for Saturday’s first-round matchup. Ohio won a pretty competitive MAC Tournament and Virginia ran into COVID issues that cut their ACC Tournament short. Head coach Tony Bennett said that Virginia won’t leave for Indianapolis until Friday and that’s if they have enough players to play.

If the Cavaliers or another team cannot compete, Louisville is on deck to be the replacement. The COVID concerns plus the difficulties of getting margin with a slow pace are reasons why Ohio has taken money.

Wichita State and Drake were two of the last four teams to get in and they’ll play on Thursday for the right to face USC. Drake has major injury issues and Wichita State is a team that skated by on account of winning an inordinate amount of close games. Mackey Arena will host this First Four game and the winner plays USC at Bankers Life Fieldhouse Saturday afternoon.

The Big Sky Conference is not great, but Eastern Washington had three-point losses to Washington State and Arizona in the non-conference to go with a competitive effort against Saint Mary’s. Kansas is another team with COVID concerns after leaving the Big 12 Tournament early following a win over Oklahoma.

We certainly have to consider strength of schedule (SOS) disparities and there are some big ones, but don’t be shocked if Eastern Washington puts a scare into Kansas, especially with a shorthanded Jayhawks roster in all likelihood.

Oregon’s body of work is not accurately reflected in any rankings or metrics site because the Ducks spent most of the season without a full roster. They have one now. The Oregon State loss in the Pac-12 Tournament was a stunner, but Dana Altman’s team had nothing to prove there. The only worry about covering 6 here in my opinion is the pace of this game. Oregon has a lot of experienced ball handlers that should be able to take care of the basketball against the aggressive VCU defense. VCU is a bad rebounding team, which neutralizes the only major weakness for the Ducks.

Grand Canyon is a great story and a pretty good team. Certainly the strength of schedule edge goes to Iowa, who plays in the Big Ten, but Grand Canyon is a strong bunch with a good head coach and some competitive efforts against teams like Arizona State and Colorado. On the other hand, an Iowa team that found its defensive rhythm about a month and a half ago looks a lot different than the team we saw early.

A healthy Iowa team should be able to cover a number like this.

Gonzaga gets such a sweet draw here that it is extremely hard to see any team that can beat them. It is a big and juicy price, but the top half of the bracket is very easy for the Bulldogs, so a trip to the Elite Eight is all but a certainty.

One strategy you could employ here is to take your favorite team from the bottom of the bracket opposite Gonzaga and hope for a freeroll in the Elite Eight. Whichever team Gonzaga plays in that round will result in a money line higher than -230. Iowa would probably be about +6 or +6.5 against Gonzaga in a rematch, which leaves the Bulldogs around -275 to -300 on the money line.

If Iowa doesn’t emerge from the bottom of the bracket, which is plenty possible, Gonzaga is a much bigger favorite on the money line over anybody else.

Maybe a better price emerges here, but Oregon is a very dangerous team in my opinion. The path for the Ducks would go through VCU, Iowa, and then probably either USC or Kansas, but Iowa has had some issues with in-your-face defensive teams like Michigan and Illinois. By no means are the Ducks on that level, as both teams are #1 seeds, but Dana Altman’s team plays excellent defense when healthy and has enough scorers to put up some points with the Hawkeyes.

Iowa also has some injury concerns. The big question for Oregon would be how they defend Luka Garza.

SIGN UP AT DRAFTKINGS SPORTSBOOK FOR UP TO A $1,000 DEPOSIT BONUS