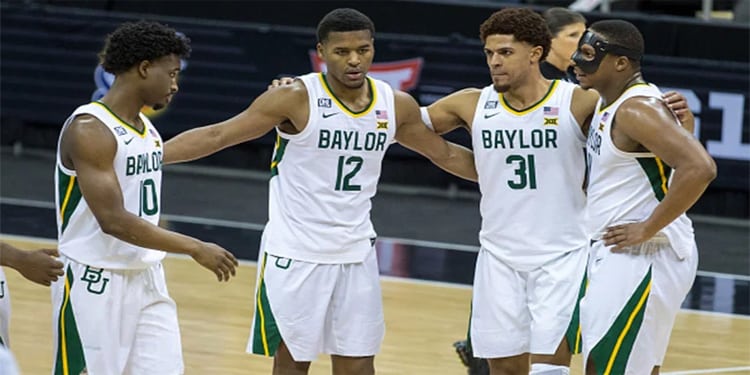 The Baylor Bears have the top spot in the South Region, but their draw could be anything but easy en route to the Elite Eight and potentially the Final Four. A particularly weak crop of #4 and #5 seeds due to injury or performance down the stretch should help all of the #1 seeds this year and Baylor falls into that category.

Villanova is down Collin Gillespie and has some other issues, while Purdue is a team that is awful away from home and might not even survive the game against North Texas. There are some really compelling matchups and some upset potential in the South Region to be sure.

The Indianapolis bubble will see games played across six venues and teams will be maneuvering all over town for their games, so keep that in mind as you handicap these matchups. The shooting backdrops range from regular college arenas to NBA arenas to Lucas Oil Stadium.

Now is a great time to sign up for a legal US sportsbook if you are in a state that has embraced the wide world of sports betting. Check out our best US sportsbooks and sign up today!

Betting odds came out quickly as demand and supply were both high on Selection Sunday. Let’s look at what those look like for the first round of games on Friday (lines from BetMGM Sportsbook):

The Hartford Hawks were a surprise winner of the America East Conference, as Vermont and UMBC both fell short, despite being unquestionably the two best teams in the league. Their loss is Hartford’s gain, as the Hawks are in the NCAA Tournament for the first time. Their visit will be short-lived and Baylor has a good chance of covering this lofty number.

There are a lot of people out there that feel like Wisconsin was disrespected. The Badgers rank 12th per Bart Torvik and 10th per Ken Pomeroy and are the 35th overall seed in the NCAA Tournament. UNC played well down the stretch in a lot of ways, but still lost six regular season games in a pretty bad ACC. Maybe this is more about the matchup than anything, or the influence of public money in March Madness with a big name in North Carolina, but I’m guessing Wisconsin goes off a favorite here. Bet the Badgers early.

12 over 5 upsets are always popular picks in brackets. The ever-dangerous mid-majors that run into mediocre major conference teams tend to become the Cinderellas that everybody wants to root for at this time of the year. Winthrop is that team here. The Eagles went 23-1. Their lone loss was a game in which they were 3-of-20 from 3. Villanova has injury problems. But, I wouldn’t count out Jay Wright. Villanova still has a lot more top-end talent than Winthrop. This looks like a scenario in which bettors are getting a little too cute.

Remember, Georgetown was 23-of-23 at the free throw line in the 72-71 win over Villanova. The Hoyas even went on to win the Big East Tournament in a real shocker.

The Mean Green navigated their way through the Conference USA Tournament to live up to the preseason hype. Purdue won five in a row before losing to Ohio State in overtime of the Big Ten Tournament. Purdue was 11-1 at home and just 7-8 in road or neutral games. Interestingly enough, it had nothing to do with Purdue’s offensive splits. They were just worse defensively on the road. I’d be wary trusting them to win by a big number here, especially in a defensive slugfest.

This might be the most interesting game in this bracket and maybe of the first round as a whole. Texas Tech underachieved during the regular season and we’ve seen Chris Beard make deep runs with the lads from Lubbock. Utah State is a team that started slow and had a rough patch in the middle of the season, but this is an excellent mid-major team that is extremely well-coached.

The problem for Utah State is limited margin for error because so much of the offense runs through Neemias Queta and Justin Bean. Texas Tech is more balanced. Utah State will probably be a trendy pick, but I’m not betting against Beard in the NCAA Tournament.

Don’t blink while watching this game. This will be a fast-paced, offensive shootout between Arkansas of the SEC and Colgate of the Patriot League. The Patriot isn’t exactly a banner league for offense, but teams scored plenty of points on the Raiders and that was even with the nation’s best 3P% defense at 26.1%. Imagine a team that can actually shoot. A team like Arkansas. This total has been a big mover since it opened. The global opener from Circa Sports was 156.5. Obviously that has been bet up and it’ll probably continue to go up. Arkansas probably gets to the upper 80s or lower 90s here, so keep that in mind when betting the side.

No offense to these two teams or these fan bases, but is there a less exciting first-round game? The line certainly implies that it will be a good one, but the ACC was a poor conference overall and a generally weak bubble makes the Hokies a pretty uninteresting team in this setting. Florida lost Keyontae Johnson and that really hurt the ceiling of the team, but the Gators went 13-8 and 9-7 in regular season play and then lost by 12 to Tennessee in the SEC Tournament despite going 10-of-24 from deep.

In other words, Ohio State has a pretty sweet path to the Sweet 16 here. The Buckeyes are a huge favorite over an Oral Roberts team that could make some noise in this game, but ultimately won’t defend well enough to pull the upset. The Buckeyes do get unlucky here in that they just played four games in four days in the Big Ten Tournament and then have to turn around and play Friday instead of Saturday.

Oral Roberts can score and Ohio State’s perimeter defense has been under the microscope, so maybe this is an over game.

MARCH MADNESS IS COMING. ARE YOU READY? SIGN UP AT BETMGM SPORTSBOOK & GET UP TO A $600 DEPOSIT BONUS

Give me Villanova minus the points over Winthrop. Jay Wright is one of the best in the country, especially in the month of March. Villanova lost to Georgetown because the Hoyas had a Herculean effort at the free throw line. They should have won and advanced and wouldn’t have been stuck on the dreaded #5 line. The Wildcats have a lot of talent still.

The price is going to be rather exorbitant, but once Sweet 16 futures are out, I cannot see Ohio State losing to Oral Roberts or the Florida/Virginia Tech winner. This will probably be in the -400 or -450 range, but the Buckeyes are an extremely well-coached and balanced team.

While I like Villanova over Winthrop, it might be worth a shot taking North Texas to the Sweet 16. Purdue is something of a Jekyll and Hyde team and Villanova does have some concerns as well. What happens with upsets in the NCAA Tournament is that you either need a high-flying, fast-tempo team to make a run, like a Florida Gulf Coast, or a defensive-minded, slow-it-down and muck-it-up type of team. The Mean Green play good defense and play very slowly. Their games against Purdue and Villanova would both be low totals with low numbers of possessions and a smaller number of possessions can keep a team like North Texas from being exposed by a more talented team.

We’ll have to wait and see when BetMGM or DraftKings post odds for the Sweet 16 props, but North Texas to make the Sweet 16 or better yet as a Money Line Rollover against Purdue and Villanova makes some sense.