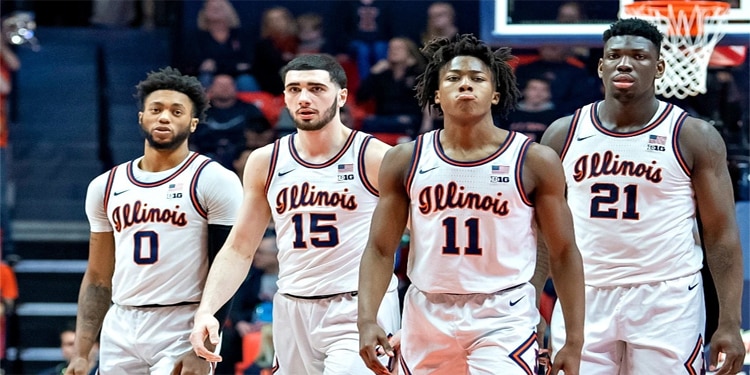 Two #1 seeds come from the Big Ten for the 2021 NCAA Tournament. The #3 overall seed and the #1 team in the Midwest Region is the Illinois Fighting Illini. A lot of very smart people have pieces of Illinois to win the title, make the Final Four, or do something that grabs headlines in this year’s version of March Madness.

The prize for winning the Big Ten Tournament may have been a #1 seed, but the path is hardly a walk in the park for Brad Underwood’s boys. The Midwest Region looks to be a good one and one that should have a lot of compelling matchups, even though the conclusion for the region in the Elite Eight looks pretty elementary at this point.

That would mean a matchup between Illinois and Houston. The Cougars are one of the highest-rated teams in the country by both Ken Pomeroy and Bart Torvik. Maybe the Madness of March enters the equation, as the #3 and #4 seeds in this region are quite good.

Now is the best time to sign up for a legal US sportsbook if you are in a state that has embraced the wide world of sports betting. Check out our list of the best US sportsbooks and sign up today!

College basketball betting odds came out pretty much as the brackets were announced on Selection Sunday and bettors put their opinions out there with limit bets. Let’s look at what those look like for the first round of games on Friday (lines from BetMGM Sportsbook):

The only drama here is whether or not Illinois will cover the spread. With a tough matchup looming against probably Loyola Chicago, you have to think Ayo Dosunmu and Kofi Cockburn are on minutes limits here coming out of the Big Ten Tournament. The backdoor could be open. On the other hand, players that don’t normally play getting a chance to play often leads to favorite covers. I don’t think I want any part of the big Illini number, but backing Drexel isn’t easy either.

The age-old tradition of screwing over elite mid-major programs is alive and well in the Midwest Region. Loyola Chicago has no business being an 8 seed. The Ramblers are seeded as the 30th-ranked team in the field. All of the ranking sites have them as a top-15 team. It’s a joke. To make matters worse, the Ramblers run into a pretty hot Georgia Tech team that just won the ACC Tournament with an eight-game winning streak in tow. This is just such a frustrating game, as both of these teams were done dirty. And then the winner gets Illinois.

For what it’s worth, I do like Loyola Chicago in this 8/9 game, but running into Illinois hurts the futures value.

I guess you have to give Oregon State some preferential treatment for winning a major conference tournament, but this is a pretty good draw for Tennessee. Usually teams on the 5 line grab a dangerous mid-major. Tennessee grabs a team that got hot for a week and had no business being in the tournament otherwise.

Liberty comes from a pretty poor Atlantic Sun Conference, but the Flames are still a dangerous team because they are extremely efficient on offense. Liberty did play the 320th-ranked schedule, while Oklahoma State played the 37th, but we do see these mid-majors overcome stuff like that every year. Cade Cunningham is the best player in this game by a large margin and the Cowboys are certainly battle-tested having played 16 games this season decided by six or fewer points.

It is worth noting that OSU doesn’t blow many teams out and they’re being asked to win by doubles here.

Another age-old tradition is bumbling major conference teams getting in over the mid-majors. Say hello to Syracuse, who has no business being in this year’s field, but the bubble was Charmin soft, so the Orange sneak in. The weird thing is that they don’t even have to participate in a play-in game. Another weird thing is that their unconventional zone defense can give teams fits, so they make runs.

San Diego State is a top-30 team on threes, so that shooting prowess could be a really big help here. Syracuse takes quite a few threes as well and teams shot a triple more than 45% of the time against the Aztecs. This looks like a pretty high-variance game, as indicated by a total that probably seems too high given the two teams.

This just looks like a bad matchup for Morehead State. The “Press Virginia” defense forces a lot of turnovers and Morehead State turned the ball over a ton in OVC play. Because the Eagles play good defense in a conference light on stops, they were able to go 17-3 and beat Belmont in the Finals. Of course, Morehead State still scored 86 in that win.

The physicality of Oscar Tshiebwe would be helpful here against Morehead’s 6-foot-10 freshman Johni Broome, but I still don’t think that’s enough for a shocker from the Eagles. That is, however, a pretty big number for WVU to cover.

Rutgers is the only lower seed favored in the first round. 10 vs. 7 upsets are pretty commonplace for the most part and this wouldn’t even be one except for the seeding. Clemson has not played particularly well down the stretch. There are a lot of people that really like Rutgers and the tough, defensive style of play. These two teams are very similar in that they are offensively challenged and defensively stout. Rutgers over Clemson will be a popular pick and I tend to agree.

MARCH MADNESS STARTS THIS WEEK. ARE YOU READY? SIGN UP AT BETMGM SPORTSBOOK

Houston over Cleveland State in the first round at -20 is one of my favorites. As much as I dislike Rick Barnes, Tennessee over Oregon State against the number on Friday is another one.

Houston +120 to make the Elite Eight looks good to me as well. That bet basically comes down to Houston vs. West Virginia in all likelihood and Houston’s money line price in that game will be steeper than +120. The Cougars would be favored in that game, likely by 4 or 5 points. You can bet that at DraftKings.

SIGN UP AT DRAFTKINGS SPORTSBOOK AND GET UP TO A $1,000 DEPOSIT BONUS