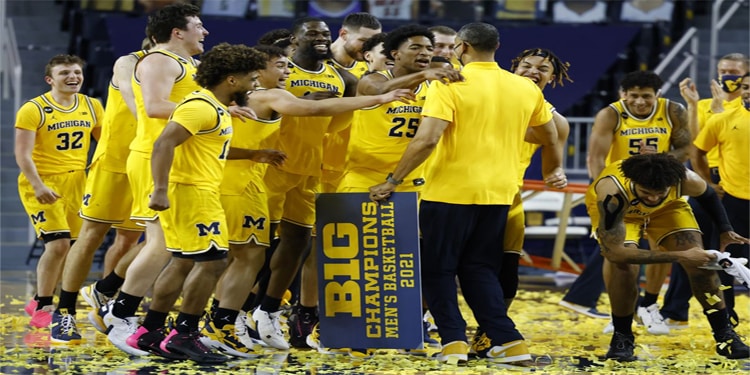 The East Region seems to feature a lot of teams that have high ceilings, but low floors. The #1 seed Michigan Wolverines have a high ceiling and a high floor, so they are the deserving top team and the #4 overall seed in the NCAA Tournament. We know that crazy things can happen in March Madness and a game between Michigan and LSU in the second round would be quite interesting.

LSU would still have to get to that point and Michigan may have a big one looming with a Florida State team that is probably a bit better than a #4 seed in the Sweet 16. The bottom half of the bracket is led by an Alabama team that won the SEC Tournament in rather emotional fashion, but draws some interesting potential matchups down the line.

It does seem like Michigan got a more favorable draw overall than Illinois, but we’ll have to wait and see once game action begins on Saturday March 20.

I’m previewing each region here at ATS.io to look for some good betting opportunities, some ATS plays and futures bets, and to provide some help as you fill out your March Madness brackets.

March Madness promotions will be flying free and easy across the industry, so keep an eye out for those and check out our list of the best US sportsbooks to sign up today!

Selection Sunday is always exciting and this year’s version was no different, especially as we look ahead to March Madness for the first time since 2019. Odds came out quickly with high supply and high demand. Let’s look at what those look like for the first round of games on Saturday (lines from BetMGM Sportsbook):

A major contrast of styles takes place on Thursday night between Mount St. Mary’s and Texas Southern. The Mount moves at a glacial pace and Texas Southern tries to speed up the game. We’ll have to see which style wins out to face Michigan on Saturday. The Wolverines will be a huge favorite over either team, but the winner will have a big impact on the total for that first round game.

The NCAA Tournament Selection Committee hates giving mid-majors a chance. St. Bonaventure certainly has a chance here against LSU, but the Tigers have enormous offensive upside against the defensive prowess of St. Bonaventure. The Bonnies aren’t a bad offense by any means, but they’ll have their hands full trying to slow down LSU’s offense. The 144.5 total is the highest for the Bonnies since January 6 in an 83-57 win over Saint Joseph’s. The Bonnies are 14-6 to the under. If this one goes over, it is bad for them.

A lot of people seem to like Georgetown here. Georgetown did take some initial money and some buzz when the brackets were announced. Colorado sits among the all-time leaders for free throw percentage and played really well early before slumping a bit down the stretch. The Hoyas were 7-9 in Big East regular season play before rolling to the conference tournament title. This is a team that got better as the season went on while Colorado got worse. Recency bias is a very real thing at tournament time. I don’t think we should fall for it here.

The SoCon Champions draw a really tough matchup here with Florida State. I’d rather have an offense-first, high-variance team when seeking out a Cinderella than a team with the profile of UNCG. They can’t shoot threes. They win with defense and rebounding. You aren’t beating Florida State like that, though for as good as the Seminoles were on the offensive glass, they were that bad on the defensive glass. Maybe that lends itself towards an over.

The other 11 vs. 11 play-in game features blue bloods to draw interest. Meh. It’s the usual ploy of the Selection Committee. Put big names in there for money purposes. It’s the nature of the beast. BYU is a pretty darn good team, though the West Coast Conference is pretty top-heavy. I do like UCLA to beat Sparty, though I’m not sure either team beats BYU.

This is actually a really interesting matchup. Abilene Christian forced the highest TO% in the nation, but a lot of that has to do with the Southland Conference. Texas didn’t force nearly as many turnovers as usual and actually struggled to take care of the basketball. The Longhorns did play extremely well down the stretch, but Abilene has good size and experience. This should be a better game than the line suggests.

A lot of people feel like Maryland shouldn’t be in the NCAA Tournament, let alone as a #10 seed. The line suggests that Maryland got a fairly favorable draw against UConn here. Maryland was a sub-.500 team in Big Ten play and 16-13 overall. They’re not a bad team, but maybe not a tournament-worthy team. UConn is offensively challenged, but pretty strong on the defensive end, hence the low total here. The winner of this game gets bounced by Alabama anyway.

Rick Pitino lamented how his seeding used to go with Louisville, so the committee put him with the best #2 seed in the field in Alabama. He got what he deserved it would appear. The MAAC season was such a mess because of COVID pauses and everything else, but credit to Iona for playing really well after their long break. They are no match for Alabama here and the Crimson Tide are likely to hang a huge number.

In terms of first-round ATS plays, I really do think Colorado has fallen victim to recency bias. Their body of work is so much stronger than Georgetown’s. I like the Buffaloes there.

DraftKings Sportsbook has Michigan to NOT make the Elite Eight at -136. I don’t think that’s a bad gamble, as LSU could be an extremely tough matchup and Florida State has as much upside as anybody and would actually have the length and athleticism to stop Hunter Dickinson. I don’t doubt that Michigan is a great team, but their draw is concerning to me.

Alabama +450 at DraftKings to make the Final Four isn’t the best price you will find once all books list that prop, but it is on my radar as more options are available.

SIGN UP AT DRAFTKINGS SPORTSBOOK FOR UP TO A $1,000 DEPOSIT BONUS