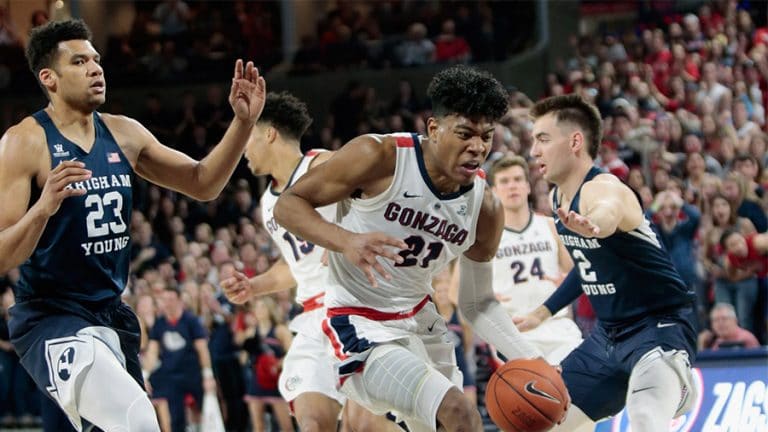 The West Coast Conference regular season winner can be crowned Saturday February 21, 2020 as the #2 Gonzaga Bulldogs (27-1 overall and 13-0 in the WCC) head to Provo to face the #23 BYU Cougars (22-7 and 11-3). The WCC race is down to these two schools, so Saturday night should be electric in Provo.

Gonzaga enter the weekend undefeated in conference play and, actually, still undefeated in games played in the United States this season. The Bulldogs lone loss was in the Bahamas and they have rarely been tested since. Gonzaga can wrap up the WCC with one more win, or one more BYU loss, this season. According to Joe Lunardi’s February 21, 2020 Bracketology, Gonzaga would be a #1 seed in the West region and would face either the #16 seed Siena or St. Francis (PA) in Spokane.

BYU is hitting their stride at the right time and will be Gonzaga’s biggest threat come WCC Tournament time. The Cougars would need a miracle to get into a tie for the regular season title, but a win Saturday night is a start. BYU would be a #7 seed in the West region and would face the #10 seed Wichita State Shockers in Los Angeles.

Below is my best bet for #2 Gonzaga at #23 BYU. All odds are from PointsBet.

Gonzaga won their 19th straight game with a second half comeback win over the San Francisco Dons. The Bulldogs went into the half trailing 31-22, but went on a 24-2 run to start the second half and put the game out of reach. Gonzaga just does not lose in the WCC and will take their perfect 10-0 road record to Provo. The Bulldogs are 15-12-1 against the spread and the over has hit in 22 of their 28 games this season.

BYU held a 10 point halftime lead, but had to fight off a feisty Santa Clara team to come away with an 85-75 home win. The game was tied with five minutes left, but BYU went on to be the tougher team and end the game with a big win. BYU has now won seven straight games and will look to extend that win streak to eight at home where they have a 13-1 record. The Cougars are 17-11 against the spread and the over has hit in 15 of their 28 games with a total this season.

Series History: These two teams have met 22 times in the past and it is Gonzaga who leads the all-time series 16-6. The Bulldogs are currently on a six game winning streak against the Cougars.

CBB Prediction: I don’t see anyone stopping Gonzaga in the WCC, so give me Gonzaga -4 Saturday night.