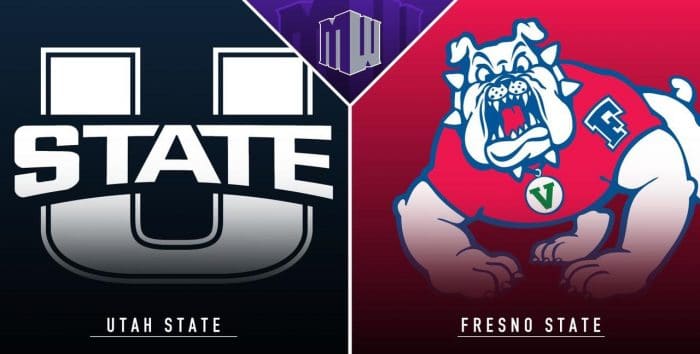 The Bulldogs (-4) are ready to host their in-conference foe Utah State Aggies in Fresno State. The game is scheduled to kick off at 7:00 p.m. ET and interested parties can tune in to the action on CBS Sports Network.

Utah State is a live dog here and is currently getting 4 points. The Aggies are also receiving +155 moneyline odds while the Bulldogs are -175. There might be some decent live betting possibilities for this game, and Vegas has determined the over/under (O/U) to be 59 points.

This game’s opening line was -3, while the total hasn’t changed since it was initially set at 59.

The Aggies are 4-4 straight up (SU), including 3-1 SU against conference opponents. The Bulldogs are 4-4 SU overall and 2-2 SU in conference play.

The Aggies dropped one to BYU 42-14 in a blowout where the passing game could’ve been sharper as Jordan Love completed 29 passes for 394 yards, one score and three interceptions. Gerold Bright (66 yards on 12 rush attempts, one TD) and the signal-caller Love (17 yards on 11 carries) led the ground attack. Jordan Nathan (seven receptions, 133 yards) and Siaosi Mariner (five catches, 86 yards, one TD) handled the receiving duties in the defeat.

Fresno State just earned a 41-38 win over Hawaii. Jorge Reyna completed 17-of-27 passes for 188 yards and one touchdown. Ronnie Rivers (103 rushing yards on 19 attempts, two TDs) and the signal-caller Reyna (96 yards on 11 carries) spearheaded the running attack while Zane Pope (five receptions, 58 yards, one TD) and Jared Rice (four catches, 46 yards, one TD) led the pass-catching corps in the win.

Utah State’s run the ball on 46.4 percent of its offensive possessions this year while Fresno State has a rush percentage of 50.3 percent. The Aggies have produced 154 rush yards per game (including 145 per game against Mountain West opponents) and have 10 touchdowns on the ground this year. The Bulldogs are logging 181 rushing yards per game (199 in conference) and have 20 total rush TDs.

The Aggies offense has tallied 266 yards/contest in the air overall (196 per game against conference opposition) and has 11 passing TDs so far. The Bulldogs have put up 235 pass yards per contest (215.5 in the MWC) and have 12 total pass scores.

Passing-wise, Love is up to 1,900 yards this season, and has completed 60 percent of his 272 attempts with eight scores through the air and 12 interceptions. Love’s got a 5.21 adjusted net yards per pass attempt, including 5.11 over the last two outings.

Gerold Bright, Jordan Nathan and Siaosi Mariner have combined for 414 yards from scrimmage and three touchdowns over the last two outings.

Similar to the Aggies, expect a balanced approach offensively from Fresno State this Saturday. Ronnie Rivers, Jalen Cropper and Jorge Reyna have combined for 559 yards from scrimmage and five touchdowns over the last two outings.

These two conference foes did not get a chance to face each other in 2018.

Fresno State has lost seven fumbles in 2019 while the Utah State offense has let six get away.

The Aggies offense has recorded six pass plays of 40+ yards, while the Bulldogs have accounted for four such plays.

The Utah State defense has allowed four pass plays of 40 or more yards, while Fresno State has given up 11 such plays.

The Aggies defense has allowed nine rushing plays of 20 or more yards, while the Bulldogs have given up eight such runs.

Utah State has lost four of its last five games SU, with a 26-point win over Nevada on October 19th accounting for the only victory over that stretch.

Fresno State has averaged 7.0 yards per carry over its last three contests and 6.8 over its past two.