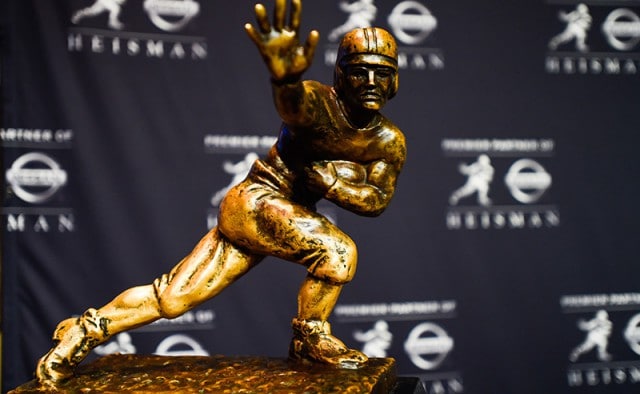 [table id=33 /]
If you want to make the College Football Playoff and maybe even go on to win the title, having a Heisman Trophy candidate is a good start. We’ve already outlined the odds to win the National Championship for the 2020 college football season. Now, let’s take a look at the candidates to win the trophy named for John Heisman, who, by the way, has a statue on the campus of the University of Akron.

That will be your last Akron mention because they don’t have any Heisman Trophy candidates, but in honor of the Rubber City, let’s talk about where the rubber meets the road in the Heisman Trophy betting market.

For starters, it helps to be a quarterback. Each of the last four winners (Lamar Jackson, Baker Mayfield, Kyler Murray, and Joe Burrow) has been a QB and nine of the last 10 (Marcus Mariota, Jameis Winston, Johnny Manziel, RG3, Cam Newton). If you want, we can go back to 2000 and see that it is a quarterback-driven award. Of the last 20 Heisman Trophy winners, 17 were quarterbacks. Reggie Bush’s Heisman was vacated from 2005. The other two were Derrick Henry and Mark Ingram, so you might as well be an Alabama RB if you want a chance at the hardware.

There is no class bias. Two of the last three winners have been seniors, but we also went from 2007-16 without a senior winning the award. In that time, four sophomores, four juniors, and two freshmen won the award.

There is one more layer of bias, though. Well, two. You have to play on a really good team and play in a Power Five Conference, so ACC, Big Ten, Big 12, Pac-12, or SEC.

With that in mind, a survey of the odds shows quarterbacks Justin Fields and Trevor Lawrence up near the top. This will be the last college football season for Lawrence, who will be the first overall pick in the 2021 NFL Draft. Fields may need another year of seasoning to throw the ball, but as a true dual-threat quarterback, he has a better chance of putting up the numbers it takes to win the Heisman than Lawrence does. Lawrence does almost all of his regular season work through the air and Clemson generally leads by so many points that the running backs get a chance to put up numbers.

In other words, if you want to take one of the two favorites, Fields is the better choice.

Things get pretty interesting after that point. First-time college starter Spencer Rattler of Oklahoma is well up the list. He was the 11th-ranked recruit nationally in his class per 24/7 and committed to Oklahoma way back in the summer of 2017. He’ll certainly have a chance to put up numbers after sitting behind Jalen Hurts last season. Oklahoma also runs the right type of offensive scheme to create a Heisman candidate and has made several College Football Playoff appearances as the best team in the Big 12, so Rattler should have a successful season in all facets.

It would be nearly impossible to take guys like Jamie Newman, Adrian Martinez, Sam Ehlinger, or Kellen Mond because their teams likely won’t be good enough to be in the National Championship picture or be prominently featured in the spotlight.

The opposite is true for Mac Jones, assuming he is able to hold off Taulia Tagovailoa for the job at Alabama. Tagovailoa isn’t listed yet, but he may be in the spring if he can push Jones for the job. For now, Jones at 25/1 makes a lot of sense given the weapons in Tuscaloosa and the numbers that he has the chance to put up.

Realistically, the best longer shot on the board is Kedon Slovis. While Sam Howell may put up some of the best numbers in the country, North Carolina is unlikely to be good enough to put him in the discussion in that same price range. Slovis has that chance to put up enormous numbers with second-year offensive coordinator Graham Harrell and a wonderful complement of wide receivers.

Slovis lost some talent from last year’s USC recruiting corps, but Amon-Ra St. Brown will be back and so will Bru McCoy and additional freshmen looking to make plays. USC has no running game to speak of and Harrell is a proponent of the West Coast offense. USC also has a terrible defense, which will force the Trojans into a lot of passing situations as the season goes along. As long as USC can win nine or 10 games during the regular season, Slovis is going to be in the discussion and has an excellent chance at winning the award.

As far as really long shots go, Kyle Trask is worthy of consideration. Dan Mullen is excellent with quarterbacks and the Florida Gators have the chance to make some national noise next season with a potential drop-off from Georgia and their placement in the SEC’s weaker division. Trask seems to be the preferred choice over Emory Jones, so he’ll get the chance to put up numbers. Like USC, Florida’s running game is lacking, but the Gators won’t throw as much as the Trojans.

All in all, Slovis is the best pick at the best price to win the award and his chief competition is the favorite in Fields, so he certainly seems like a worthy bet.