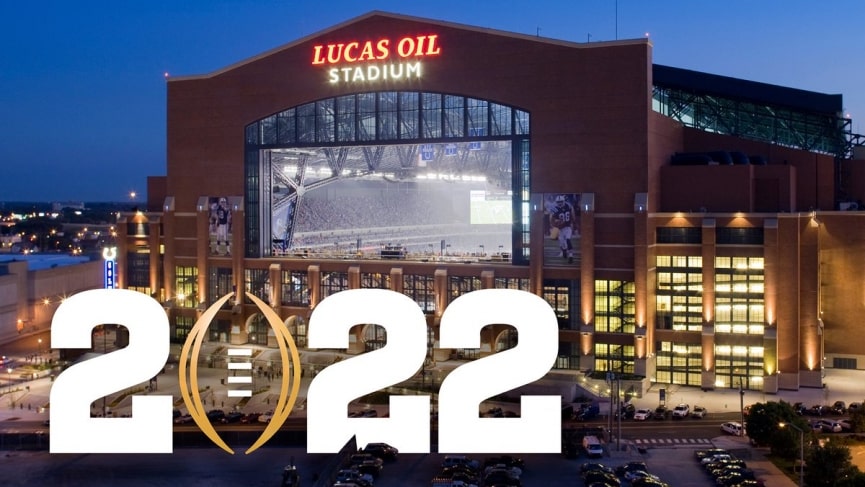 The 2021 College Football season will feel a whole lot different than last year’s. Not only are we talking about full seasons worth of games for teams, but also full stadiums full of fans. We’ll have to wait and see if everything works out as planned, but things sure do look a lot different on the COVID-19 front now than they did last fall.

National Championship odds have basically been out since the last National Championship Game finished up with yet another Alabama title. Some of the nation’s top teams have experienced a ton of roster turnover, as Clemson, Ohio State, and Alabama will all be breaking in new quarterbacks this season. Both teams also have significant losses in other areas.

The College Football Playoff has not been expanded yet. When it happens, that will really skew the futures odds, but for now, four teams will make it, all from Power Five conferences, and the usual suspects, losses or not, are up at the top of the betting board.

Every team is listed in one way, shape, or form, but as you can see from the Consensus odds (sort by clicking on the column header), five teams are being given a reasonable shot to win it and the rest face a very uphill climb.

Alabama is the favorite, with Clemson the second favorite, Ohio State the third favorite, and then Georgia and Oklahoma battling it out to be the next choice. In other words, basically a carbon copy of the College Football Playoff years that we’ve most recently seen.

LSU spoiled the party one year with Heisman Trophy winner Joe Burrow at the helm, but the Tigers were in rebuilding mode last year and don’t seem to have worked out all of the kinks just yet heading into this year.

Iowa State seems to be the clear-cut second-best team in the Big 12 according to these odds, but what are the chances that the Cyclones can not only make the top four, but then beat a team when they get there? That is what makes the futures market for CFB such a huge challenge.

Teams like Alabama, Clemson, Ohio State, Georgia, and Oklahoma will be favored in most, if not all, of their games. There has never been a two-loss team in the College Football Playoff. You can only slip up once, basically have to win your conference title, and then also have to be able to make money for the NCAA.

It greatly limits the pool of available teams that you can bet on. You need a team that can get through the regular season virtually unscathed and do so without losing a big game at the end. You also need a team that can upset an Alabama, Ohio State, or Clemson, so a team from the opposite division or a team within the division with a home game and a good chance at an upset.

Somebody like a Penn State at +8000, as the Big Ten is rather mediocre again this season. If the Nittany Lions can beat Ohio State, why couldn’t they beat Wisconsin or Iowa or somebody for the Big Ten Championship? Can the Big Ten champion actually be kept out of the College Football Playoff?

These are the things that you have to think about when surveying the NCAAF futures market.

The NCAA exists to make money. Politics very much come into play when it gets down to the College Football Playoff and the last four teams left standing to battle it out for a title.

As a result, going too far down the board is really challenging. A team like USC, picked to potentially be the best from the Pac-12, makes some sense, in that they are a Power Five Conference team that can actually carry enough name value to get in there. We’ve seen Oregon do it and we all know the money that those uniforms generate for Nike and the NCAA.

It isn’t a conspiracy theory or anything like that. It is a reality that the college football world does have preferential treatment come Playoff time, which is one reason why a lot of people want to see expansion.

At some point, we will, but that time is not today. As a result, you really have to dig deep and think about all of the different factors that come into play. Schedule analysis is very important. Being aware of all of the changes and the personnel gains and losses goes a long way.

You have to keep in mind that we’ve had the College Football Playoff now for seven seasons. Out of 28 possible playoff spots, we’ve only seen 11 teams qualify. Only five teams have made it more than once and four teams have at least four appearances. The playing field is unlevel.

Clemson’s only miss was 2014, the first year of the Playoff.

In order to have any hope of cashing a National Championship future, you have to get a College Football Playoff team and based on the history of this event, that seems highly unlikely.

It can happen, but you’ll have to do a lot of research to see which team it could be.