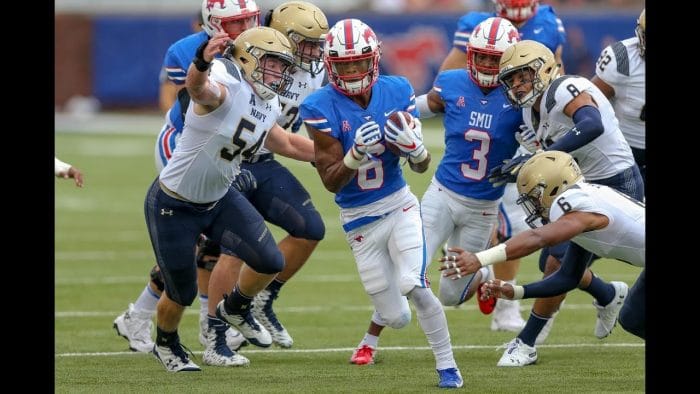 A big American Athletic Conference showdown heads to Maryland Saturday as the #25 SMU Mustangs go to Annapolis to take on the Navy Midshipmen in a but West division matchup. The winner of this game will still be alive to win the West division while the loser will be eliminated from contention having suffered losses to both teams ahead of them.

SMU currently sits a 5-1 in the American, 9-1 overall, and are tied for first place in the West division with both Memphis and Navy. The Mustangs lost to Memphis a few weeks back, so even with a win Saturday SMU will need some help to win the West division. SMU will be going bowling for the first time since 2017.

Navy also sits at 5-1 in the American, 7-2 overall, and are tied for first place in the West division with both Memphis and SMU. The Midshipmen lost to Memphis earlier in the season, so even with a win Saturday Navy will need some help to win the West division. Navy will be going bowling for the first time since 2017.

Below is my pick for the #25 SMU Mustangs at the Navy Midshipmen. All lines are from the William Hill Sportsbook.

SMU is coming off a bye week and will be fresh for this big West division matchup at Navy. Prior to the bye, SMU bounced back from their first loss of the season to beat ECU 59-51. This game was mainly a one possession game all second half as both offenses put on a show all game. The Mustangs are 4-1 on the road this season with their only loss being a six point game at then #24 Memphis. SMU is 6-3-1 against the spread and the over has hit in nine of their 10 games this season.

The Navy Midshipmen were in a tough spot last week as they had to travel to South Bend and face then #16 Notre Dame a week before this big matchup with SMU. Navy looked like they might have been looking ahead as they fell behind 45-3 and ultimately fell 52-20. The loss ends Navy’s chances of getting to a New Years Six Bowl, but the Midshipmen are still looking to get to the American championship game. The Navy Midshipmen are 6-3 against the spread and the over has hit in six of their nine games this season.

Football Prediction: SMU +3.5 is my pick in this one.