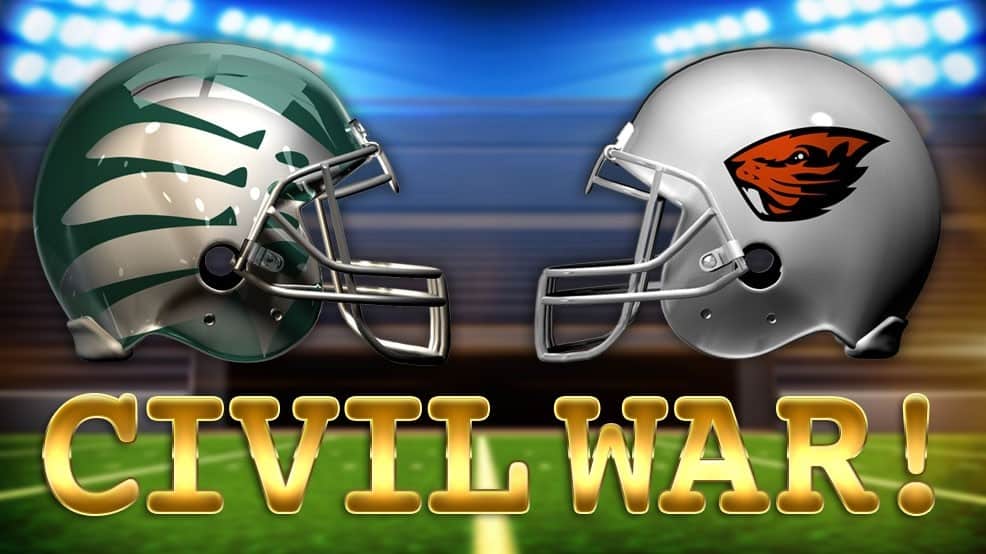 The rivalry formerly known as the “Civil War” is set for Friday, November 27, 2020, when the #9 Oregon Ducks (3-0) visit the Oregon State Beavers (1-2). Both schools are currently taking suggestions for a new name for this historic rivalry. Oregon is in first place in the Pac-12 North and Oregon State sits in fourth. This game will air live on ESPN at 7:00 p.m. EST.

Through three games, the Oregon offense is averaging 38.7 points per game and 499.7 yards per game, 291.0 through the air and 208.7 on the ground. CJ Verdell leads the team with 241 rushing yards and three touchdowns, and Devon Williams has a team high nine receptions for 163 yards and one touchdown. Defensively, the Ducks are allowing 26.0 points and 432.0 yards, 244.0 passing and 188.0 rushing.

Last time out, Oregon hosted the UCLA Bruins and sneaked away with a 38-35 victory. This game was back and forth all night, but UCLA could not get the final touchdown to win or field goal tie, so Oregon got the win. QB Tyler Shough went 19/30 for 334 yards, three touchdown, zero interceptions, and added 31 rushing yards. Wide receiver Devon Williams hauled in six balls for 123 yards and one touchdown on the day. The Oregon defense allowed 462 total yards and forced Bruins turnovers, two interceptions and two fumble recoveries.

Oregon State got their first win of the season with a 31-27 home victory over the Cal Bears. This game featured six lead changes and was not won until Oregon State scored a one-yard touchdown run with less than five minutes to go in the game. Running back Jermar Jefferson exploded for 196 yards and one touchdown on just 18 carries. Jefferson started the game with a 75-yard touchdown run on the first play from scrimmage. The Oregon State defense allowed 439 yards and forced two Cal interceptions.

Series History: Oregon has won three straight games in this rivalry and leads the all-time series 66-47-10.