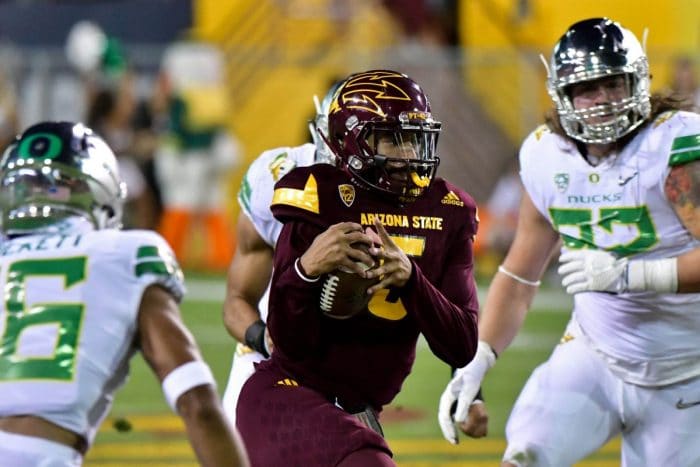 The Pac-12 will be in the primetime slot Saturday night as the highest ranked team in the conference, #6 Oregon, travels to Tempe to take on the Arizona State Sun Devils. Oregon is fighting to get into the College Football Playoffs, while Arizona State is looking to get bowl eligible with a win.

Oregon came in ranked #6 in the most recent College Football rankings and need to jump two SEC teams, in Georgia and Alabama, to reach the playoffs this season. The Ducks have already clinched the Pac-12 North and need #7 Utah to win out, so that Oregon can get another Top 10 win on their resume.

Arizona State did not expect to be in this position six games in this season when they were sitting at 5-1 and has beaten two top 20 teams, but here they are. The Sun Devils now need to win one of their final two games to become bowl eligible for the third straight season. ASU ends the season with their rivalry game against Arizona next weekend.

Below is my pick for the #6 Oregon Ducks at Arizona State Sun Devils. All lines are from the PointsBet Sportsbook.

The Oregon Ducks extended their winning streak to nine games with a 34-6 throttling of the Arizona Wildcats. Oregon took a 14-0 lead in the first quarter and never looked back in what was a bit of a sleepy 28 point win. The Ducks lost their season opener, to then #16 Auburn, but since then has been destroying everyone that has come in their way. The Pac-12 North leaders are 3-0 on the road this season, though they did lose a not so neutral site game to Auburn. Oregon is 6-4 against the spread and the under has hit in six of their 10 games this season.

The Arizona State Sun Devils losing streak stretch to four games with a heartbreaking 35-34 loss at Oregon State. Arizona State scored a touchdown with 1:40 left to get within one point and, rather than kick the game tying extra point, the Sun Devils failed on a two point conversion and fell once again. The Sun Devils are 2-1 against ranked teams this season and are 3-2 at home in 2019. Arizona State is 3-7 against the spread and both the over and under has hit in five of their 10 games this season.

Football Pick: I think Arizona State shows up for this one and keeps it within two TDs, so I am backing ASU +14.5.