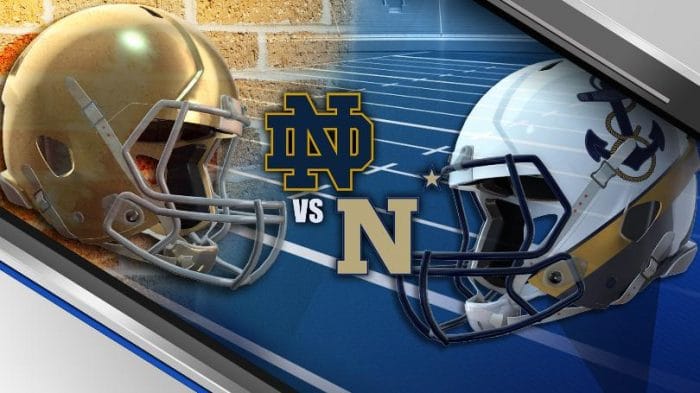 A classic non-conference rivalry will take place in Week 12 as the #23 Navy Midshipmen travel to South Bend to take on the #16 Notre Dame Fighting Irish. These two teams first met in 1927 and Saturday will be the 93rd meeting between these two universities.

Navy entered the College Football Playoff committee rankings and now have a real shot of getting to a New Year’s Six bowl, though they do have three other Group of 6 schools to pass. The Midshipmen enter play at 7-1, 5-1 in the American Athletic Conference, and control their own destiny as they are currently tied with first place SMU. Navy and SMU will meet next weekend. The Midshipmen will once again go bowling after a one year hiatus.

Notre Dame enter play at 7-2 and are just playing out the string trying to get to double digit wins. The Fighting Irish will be going bowling for the ninth straight season.

Below is my pick for the #23 Navy Midshipmen at the #16 Notre Dame Fighting Irish. All lines are from the FanDuel Sportsbook.

Navy went into their bye week flying high as they are currently on a five game winning streak and blew Connecticut off the field, 56-10, last time out. The Midshipmen offense has been prolific all season, having scored at least 34 points in seven of their eight games, and have put up 40+ points on five different occasions. The Naval Academy’s lone loss this season was a 35-23 road loss to Memphis early in the season. Navy is 6-2 against the spread and the over has hit in five of their eight games this season.

The Notre Dame fighting Irish rebounded nicely from a few poor weeks and beat Duke 38-7, on the road, last time out. The game was never in doubt and was much needed for Notre Dame who had played three poor games in a row – however they did win two of those games. The Fighting Irish have played three ranked teams this season and have gone 1-2, having lost at then #3 Georgia and at then #19 Michigan, but did beat then #18 Virginia at home. Notre Dame is 5-4 against the spread and the under has hit in six of their nine games this season.

College Football Pick: I like Notre Dame to win this one by a touchdown, so I am backing Navy +8 Saturday afternoon.