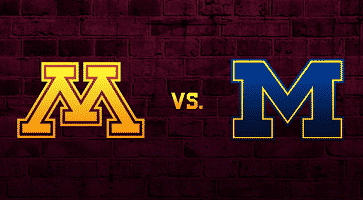 It is the opening weekend of the Big Ten season and the Little Brown Jug will be on the line when the #18 Michigan Wolverines visit the #21 Minnesota Golden Gophers on Saturday, October 24, 2020. Both teams are contenders for the Big Ten Championship and this game could be a good steppingstone for whichever team wins. This game will air live on ABC at 7:30 p.m. EST.

The 2019 Michigan Wolverines season did not go as expected, as Michigan was picked to win the Big Ten-East during media day and ended up finishing in third place. Michigan finished the season ranked #18, 9-4 overall, 6-3 in the Big Ten, and with a bowl loss to #13 Alabama. During the regular season, Michigan had nice wins over #14 Iowa and #8 Notre Dame, but lost to #13 Wisconsin, #7 Penn State, and #1 Ohio State. It was another under achieving season for Jim Harbaugh and the Michigan Wolverines.

Minnesota is coming off one of their best seasons in program history as the Golden Gophers finished #10 in the polls, 11-2 overall, 7-2 in the Big Ten, and an Outback Bowl win over #12 Auburn. The Golden Gophers greatly overachieved as they were picked to finish sixth in the Big Ten – West and ended up finished second based on head-to-head against Wisconsin. During the regular season, Minnesota beat #4 Penn State, but did fall to #20 Iowa and #12 Wisconsin. Overall, it was a great year for P.J. Fleck and the gang.

Below is my pick for the #18 Michigan Wolverines at #21 Minnesota Golden Gophers. All odds are from DraftKings Sportsbook.

Michigan lost a lot on offense, but do return QB Joe Milton, RB’s Hassan Haskins and Zach Charbonnet, and WR Ronnie Bell. Defensively, the Wolverines return defensive lineman Kwity Paye and Aidan Hutchinson, as well as LB Cameron McGrone, and safeties Brad Hawkins and Daxton Hill. There is a lot to replace, but Michigan never lacks for talent.

Minnesota returns a lot of offensive talent from a year ago as QB Tanner Morgan, WR’s Rashod Bateman and Chris Autman-Bell, RB Mohamed Ibrahim, athlete Seth Green, and the entire offensive line return for the 2020 season. Defensively, the Golden Gophers will be relying on defensive lineman Micah Dew-Treadway, line backer Mariano Sori-Marin, and defensive backs Benjamin St.-Juste and Coney Durr. Minnesota should be in the mix once again this season.

Series History: Michigan has one two straight meetings in this rivalry and leads the all-time series 75-25-3.

CFB Picks: Give me Minnesota +2.5 in the primetime Saturday game.

2020 Odds on Who Will Win The Mountain West Conference