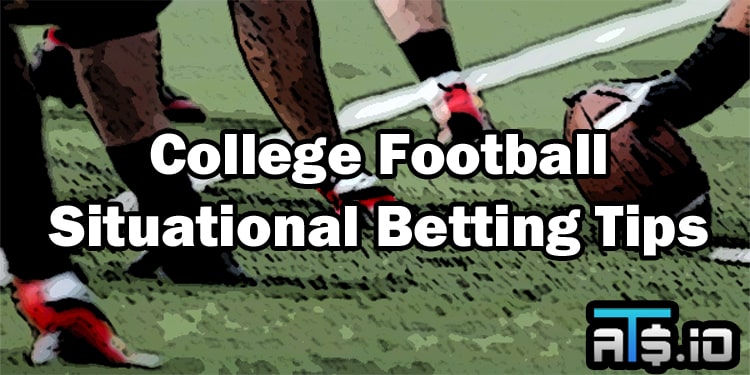 College football bowl season is usually full of interesting nuggets, situational angles, and other storylines. That is still true of this year’s bowl season, but everything is different. The time between the bowl announcements and the bowl games is much smaller than before. COVID and opt-outs are going to take away key players over the course of the bowl season.

It’s all unique and different, but we’ve been dealing with that all season long anyway. One thing that could play a significant role going forward is that a lot of teams only played conference games. Now they will step into non-conference environments against teams that simply may be more talented, despite worse records and stats.

We have a lot to consider. That’s really all there is to it.

We’ll take a look at some situational spots to consider and some betting trends or other angles to factor into the handicap this bowl season. You can decide for yourself how much or how little they mean to you.

Here are some betting tips and situational spots to consider for the bowl season:

This will be an angle that runs across multiple games. UCF hasn’t played since November 27. BYU played on December 5 and 12. UCF knew relatively early on that they were going to be in a bowl game and likely the Boca Raton Bowl, but it is hard to stay sharp with a bunch of practice for just one game, especially with what has already transpired this season. BYU was also 8-3 ATS and UCF was 3-6 ATS and really disappointed late in the season. These long layoffs will make for tough handicaps. Money poured in on BYU, possibly as a result.

It is always interesting to see how teams do matching up against the triple-option offense in bowl season. Georgia Southern runs the triple-option. Louisiana Tech didn’t see that during the regular season. Skip Holtz is actually a very solid bowl coach. He’s 6-0 at LA Tech, including three straight outright upset wins. Perhaps that is the reason why LA Tech has taken some buyback after the line jumped to 6.

Houston is one of several sub-.500 teams in a bowl game. The Cougars take on a Hawaii team that hasn’t left the island since November 14 against San Diego State. In fact, Hawaii played three of its first four on the road. This is the New Mexico Bowl, but it will be played in Frisco, Texas. It remains to be seen if the Cougars will fly from Houston to Dallas or take a bus up I-45, but it is a much easier trip than flying from Honolulu.

South Carolina has only won three of its last 33 games as an underdog of six or more points, but the Gamecocks from the SEC are now an underdog of that magnitude against a Conference USA team. South Carolina was last an underdog of this magnitude outside of the SEC and Clemson back on December 19, 2016 in the St. Petersburg Bowl. That wound up being a 46-39 loss to South Florida with a line of +10. We’ll have to see how the Gamecocks fare here, but suffice it to say they’ll be the only 2-8 bowl team in history and may be the last one ever.

This is the game that we were supposed to get on December 5. Instead, we got Coastal Carolina vs. BYU in maybe the best game of the season. Liberty hasn’t played since November 27, a 45-0 win over UMass. Coastal has two weeks prior to this game because the Sun Belt Championship Game against Louisiana was canceled because of COVID issues with the Chanticleers. Maybe they’ll be in better shape on that front for this game. Liberty could be very rusty at the outset.

Texas is 8-9-1 ATS as a double-digit favorite on Tom Herman’s watch. They are 12-7 ATS as an underdog under Herman, including seven outright upset wins. This is generally not the kind of role you want to back Texas in. This is the Alamo Bowl and maybe the Lone Star State’s rich history is factoring into the price with the Longhorns in this game for the second straight season. All I know is that it’s usually better to fade Herman in this role than bet on his team at an inflated price.

Let’s see what the rosters look like for this year’s Cotton Bowl. Florida already saw star TE Kyle Pitts opt out. Thus far, nobody else of great consequence has, at least prior to this game, but it is still worth watching to see what happens going forward. The better teams will have more depth to compensate for those losses, but some losses would be impossible to compensate for, like a Kyle Trask. Oklahoma is 0-3 in bowl games under Lincoln Riley, but those losses have been Georgia, Alabama, and LSU.

West Virginia has played one game since November 14. That was a lopsided blowout loss at the hands of Iowa State on December 5. The Mountaineers will take on a Tennessee team that will be playing its fourth game in December. The Vols are only 3-7 on the season, so they really don’t look the part of a team that belongs in a bowl game. It’s all about the Mountaineers and the long layoff here.

These are always fun bowl games. Ball State hasn’t been to a bowl since 2013. San Jose State hasn’t been to a bowl since 2015. That means neither one of these coaches have prepared a team for a bowl game. Usually teams that have a long bowl drought are highly motivated. These are also both conference champions. We don’t have many pure handicaps across the college football bowl landscape, but this one is.

Georgia’s season really turned when JT Daniels took over at quarterback. Who knows what would have happened for the Bulldogs had it happened sooner. What we do know is that this is a massive step up in class for Cincinnati. The Bearcats played Boston College in the Birmingham Bowl last season. They played Virginia Tech in the Military Bowl in 2018. They haven’t faced the likes of Georgia. This is one where we could just see the better team show its superior athleticism, even though Cincinnati’s body of work has been dominant and impressive.

The largest spread in College Football Playoff history is this one with Notre Dame and Alabama. The Crimson Tide are -19.5 or even -20 in some places. There isn’t really much more to say about this game other than that. Notre Dame was last this big of an underdog back in 2008 as a 32-point underdog against USC. Notre Dame was +14 against Georgia in Week 4 of 2019. This is only the 11th time that Notre Dame has been a dog of 14 or more. It’s a big number.

This is the second year in a row that Ohio State and Clemson will face off in the College Football Playoff. Last year’s line was more like Clemson -2.5. This one is certainly adjusted with Ohio State falling off a little bit. Ohio State hasn’t been this big of an underdog since the upset of Alabama in the 2015 College Football Playoff. Prior to that, it was the Michigan game in 2011. Ohio State has actually covered five straight as a dog of a touchdown or more, but it’s extremely rare and hasn’t happened with this bunch.

Iowa State is in a bowl game for the fourth consecutive season and for just the 16th time in program history. The Fiesta Bowl is very much the biggest bowl game spot for Iowa State. Normally we’d look to back Matt Campbell in an underdog role, but Iowa State has played well in a favorite role this season. The Cyclones have been a dog in all three of Campbell’s bowl appearances, going 1-2 straight up.

Win Your Chance at $100,000 from DraftKings Sportsbook This Week in the NBA