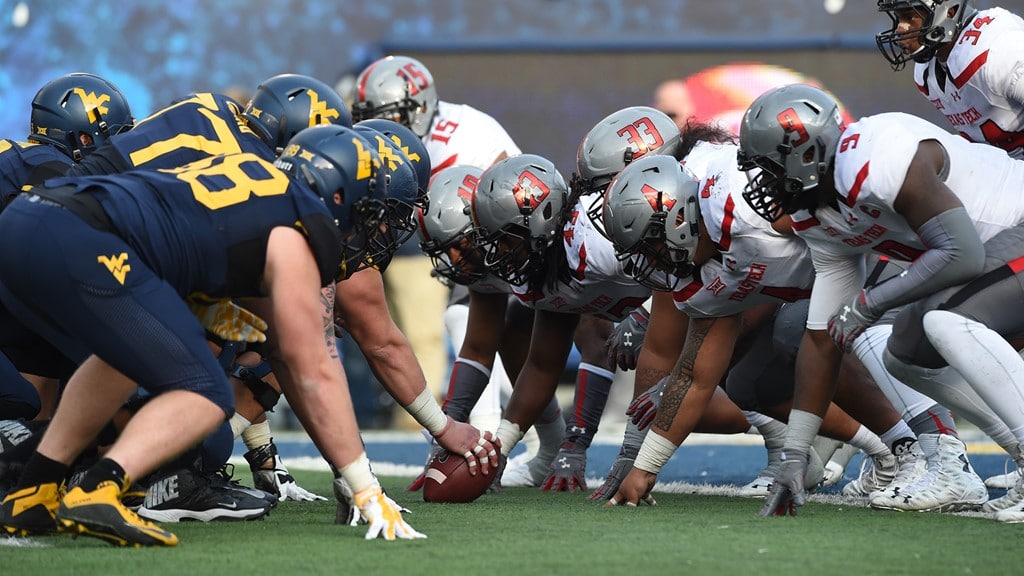 The Texas Tech Red Raiders (-1.5) are set to pay a visit to their in-conference counterpart West Virginia Mountaineers at Mountaineer Field at Milan Puskar Stadium. This afternoon game is scheduled to get underway at 12:00 p.m. ET and fans can catch it live by tuning in to ESPN2.

West Virginia is playing the role of underdog and is currently getting 1.5 points at DraftKings in this Saturday Big 12 game. The Red Raiders are also receiving -120 moneyline odds while the Mountaineers are +100. Oddsmakers have set the over/under (O/U) at 60 points. There might be some good in-game betting possibilities for this match.

The over/under has yet to change after it was initially set at 60. Having said that, the line opened at 0 and has recently moved up to 1.5.

The Red Raiders are 3-5 straight up (SU), including 1-4 SU against conference opponents. The Mountaineers are 3-5 SU overall and are also 1-4 SU in conference play.

The Red Raiders dropped one to Kansas 37-34 in a game where their defense allowed the Jayhawks to pass for 415 yards and three touchdowns while rushing for 112 yards and two scores. On the offensive side of the ball, Jett Duffey completed 23-of-34 passes for 271 yards and three touchdowns. SaRodorick Thompson (80 rushing yards on 20 attempts, one TD) and Armand Shyne (53 yards on 12 carries) propelled the running attack while Dalton Rigdon (seven receptions, 76 yards, one TD) and KeSean Carter (three catches, 24 yards) shared the receiving duties in the defeat.

One week ago, Baylor knocked off this West Virginia crew by a score of 17-14. Austin Kendall completed 20-of-39 passes for 205 yards, one touchdown and one interception. Kendall (20 yards on nine rush attempts) handled the running game while Winston Wright (four receptions, 31 yards) and Isaiah Esdale (three catches, 26 yards) led the West Virginia pass-catchers in the loss.

When glancing at offensive play-calling, each squad has a similar (45-55) run-pass ratio on the season. Having said that, the Red Raiders have produced 173 rush yards/game (including 176 per game against Big 12 opponents) and have 14 touchdowns on the ground this year. The Mountaineers haven’t been as productive, as they’re averaging 79 rush yards per game (79 in conference) and have seven total rushing TDs.

The Red Raiders offense has tallied 305 yards/game in the air overall (284 per game versus conference opposition) and has 15 passing scores so far. The Mountaineers have produced 223 pass yards per outing (222.8 against Big 12 competition) and have 13 total pass TDs.

Passing-wise, Duffey has put up 1,181 yards on the year, and has connected on 65 percent of his 141 attempts with eight scores through the air and only two interceptions. Duffey’s got an 8.17 adjusted net yards per pass attempt overall, although that number sits at 6.61 over the last two outings.

When these two squads faced each other last year, West Virginia got the victory 42-34.

Texas Tech 14, West Virginia 18 – Take the Mountaineers and Under!

The West Virginia offense has lost three fumbles this season while Texas Tech has let four get away.

Each team has produced six pass plays of 40 or more yards. The Red Raiders have have made 13 pass plays of 30+ yards while the Mountaineers have created 10 such plays.

The Texas Tech defense has allowed 15 pass plays of 40 or more yards, while West Virginia has given up three such plays.

The Texas Tech offense has created 10 rushing plays of 20 or more yards, while West Virginia has created five such runs.

The Red Raiders defense has allowed 16 rushing plays of 20 or more yards, while the Mountaineers have given up five such runs.

In its last three matchups, West Virginia is 1-2 ATS and the under cashed in two of those three.

In its last three contests, Texas Tech is 1-2 ATS and the over cashed in each of those three.

Texas Tech has lost six of its last seven games SU, with a 10-point win over Oklahoma State on October 5th accounting for the only victory over that span.

The Over/Under for Texas Tech’s last game going into it was 65. The over cashed in the team’s 37-34 defeat to Kansas.