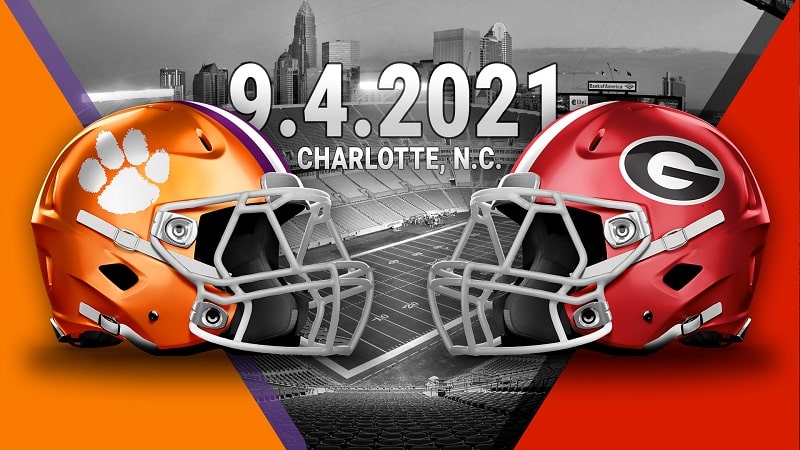 Clemson vs Georgia Betting Preview – Hammer The Over DraftKings Promo

College Football is back, and the Week 1 blockbuster surely won’t disappoint. The 2020 SEC East runners-up, #5 Georgia Bulldogs face off against the reigning ACC Champions, #3 Clemson Tigers on September 4, 2021, in the Duke’s Mayo Classic in Charlotte, North Carolina. This game will air live on ABC at 7:30 p.m. EST.

Starting 8/29 at DraftKings, all users can bet the over on the Clemson vs Georgia game on 9/4 and for every 2,500 customers who bet the over, the point total needed in the game will be reduced by .5 points. The more people that bet, the better chance the over hits!

The Clemson Tigers lost a lot from last season, including the first overall pick Trevor Lawrence, but Dabo and his staff to continues to reload season after season. DJ Uiagalelei is the heir apparent and could be a future first overall pick if his talent comes to fruition for the Tigers. Uiagalelei stepped in for two games last season and threw for 429 yards and two touchdowns on the road against the Notre Dame Fighting Irish. The talented QB will have plenty of weapons to choose from, but the big guy on the outside is often injured Justyn Ross. The 6-4, 205-pound receiver is the ultimate deep threat, and a top 10 talent, but is coming off a career-threatening spinal issue. Along with Ross, is returning TE Braden Galloway, a future NFL draft pick, and youngsters EJ Williams, Frank Ladson, and Joseph Ngata.

On defense, Clemson might have the best collective group in the nation as they return eight of team’s top ten in tackles for loss and nine of the top 12 tacklers from last season. Bryan Bresee is the guy to look out for here as the defensive lineman has top five pick potential. As usual, the Clemson secondary will lock down opposing receiving units. This defense has a chance to be something special in 2021.

Georgia returns, potentially, one of the better QBs in the nation as former USC Trojan JT Daniels will start under center for the Bulldogs. Daniels was impressive for the Trojans as a Freshman, when he should have been a high school senior, but injuries have derailed the talented trigger man. Daniels will be the first downfield passing threat that Georgia has had since Kirby Smart took over. Georgia is going to be without the talented George Pickens, though he may be come back from injury later in the season, but Arik Gilbert should be expected to be peppered with targets. Running back Zamir White will take some pressure off Daniels as the talented Junior is another in a long line of talented Bulldog running backs.

The nations best run defense returns defensive tackle Jordan Davis who has all the tools to be a future NFL star. The DT will be joined on the line by defensive end Travon Walker and both linemen will be filtering the run to talented linebackers Adam Anderson and Nakobe Dean. I think Georgia has their best chance a National Championship since Kirby Smart came on board and this defensive line is a major reason why.

Bet The Over On Clemson Vs Georgia Now At DraftKings Sportsbook

Series History: Georgia leads the all-time series 42-18-4 and won the teams most recent meeting back in 2014.

This game may feature two of the best 10 defenses in the country when the season is done, so jumping on the over at 52.5 in this blockbuster Week 1 game may seem risky however we expect the offenses to be alittle ahead of the defenses to start the season and expect this promotion to take the total way…way way down into the 40s if not 30s at which point the over is the play! For the game, give me Georgia +3.5 to keep it close and potentially win outright.