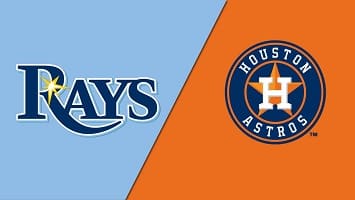 It is do or die in the American League Championship Series on Wednesday, October 14, 2020, when the Tampa Bay Rays will look to sweep the Houston Astros right out of Petco Park. The Astros are technically the home team in this game four, but every game is taking place in San Diego. This game will air live on TBS at 8:40 p.m. EST.

Game one of this series took place Sunday night and saw the Tampa Bay Rays grind out a 2-1 victory. The Astros jumped out to a quick 1-0 lead, in the top of the first inning, thanks to a Jose Altuve solo home run. Tampa fought back to tie it up with a Randy Arozarena solo home run in the bottom of the fourth, and then took the lead with a Mike Zunino RBI single in the bottom of the fifth.

Tampa Bay jumped out to a quick 3-0 lead, thanks to a Manny Margot three-run shot in the bottom of the first inning, and never looked backed. The Rays ultimately won game two 4-2 and were able to get out of a bases loaded jam in the top of the ninth inning. Tampa Bay now has a commanding 2-0 series lead.

Game three saw Tampa Bay take a 3-0 series lead thanks to a 5-2 victory. The Astros led 1-0 heading into the top of the sixth, but a five-run inning saw the Rays take control of the game and the series. Tampa Bay pitching has been brilliant all series and they turn to one of their best to clinch a spot in the World Series.

]Below is my pick for the Tampa Bay Rays vs Houston Astros. All odds are from DraftKings Sportsbook.

Tyler Glasnow is set to make his fourth start of the 2020 postseason and the Rays will look to go 4-0 in those starts. Glasnow started game two of the ALWCS and held the Toronto Blue Jays to six hits and two earned runs in six innings pitched. The righty then started game two of the ALDS and allowed three hits and four earned runs in five innings pitched against the Yankees. Glasnow also got the start in the do or die game five and pitched 2.1 hitless, scoreless, innings.

Zack Greinke is set to make his third start of the 2020 playoffs and will hope to pitch more like his first start than his last. Greinke started these playoffs with a four inning, two hits, one earned run appearance against the Minnesota Twins in the ALWCS. The righty then faced the Oakland Athletics in the ALDS and allowed five hits and four earned runs in just 4.2 innings pitched. Greinke will need to step up to keep his team alive this season.

MLB Picks: The Tampa Bay Rays sweep and clinch a spot in the World Series.