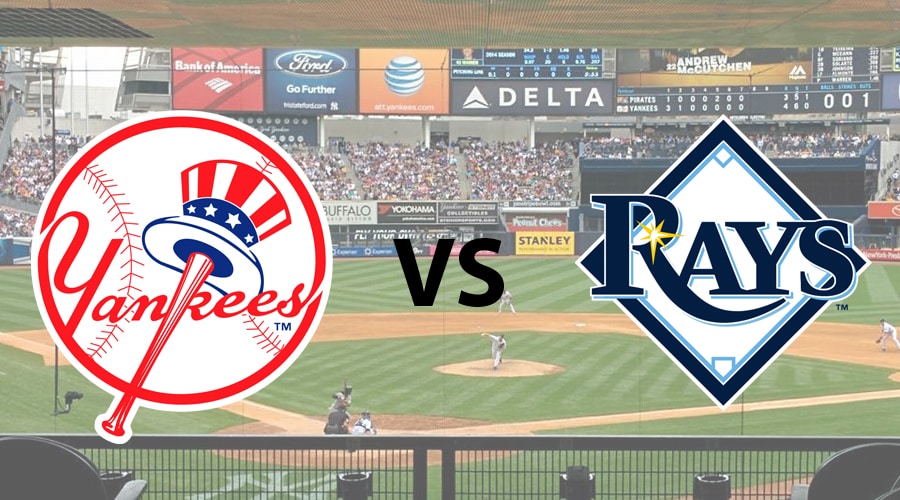 Two American League East juggernauts begin a three-game series on Tuesday, August 18, 2020, when the Tampa Bay Rays (14-9) visit the New York Yankees (16-6). These are the top two teams in the AL East with the Yankees holding a 2.5 game lead over Tampa Bay. This game will air live on ESPN at 7:00 p.m. EST.

Tampa Bay visited the Toronto/Buffalo Blue Jays and took two of three over the weekend. The Blue Jays cruised to a 12-4 win on Friday, but Tampa Bay fought back for 3-2 win in game two thanks to a Brandon Lowe home run in the top of the ninth. Saturday’s game was suspended and finished on Sunday. In a seven-inning game, Tampa Bay came away with a 7-5 win in extras thanks to a Willy Adames two-run shot in the top of the eighth.

New York has won six straight games and is coming off an easy four-game sweep over the lifeless Boston Red Sox. The Yankees were not even challenged in this series as they won game one 10-3 and game two 11-5. Game three looked close, but it was a comfortable 4-2 win for New York, and the Yanks completed the sweep with a routine 6-3 win on Monday.

Below is my pick for the Major League Baseball showdown between the Tampa Bay Rays at New York Yankees. All odds are from DraftKings Sportsbook.

Blake Snell is ready for his fifth start of the season, but Tuesday will be just his second attempt at going deep into a game. Snell started the season with three starts that lasted three innings of less as he looked to build up his arm after the long layoff. The lefty gave up just three runs and seven hits over eight innings during that span. Snell finally let loose in his last start and held the Boston Red Sox to four hits and no runs over five innings.

Masahiro Tanaka has been sharp to start 2020 and will look to continue his great form as he heads into his fourth start. Tanaka has made three starts and held opponents to 10 hits and four runs (three earned) over 11.2 innings pitched. The veteran righty was hit in the head with a line drive during summer camp and did not make his season debut until August.

New York is without both of their stats leaders as DJ LeMahieu and Aaron Judge were red hot before getting hurt. LeMahieu, the veteran second baseman, leads the team with a .411 batting average, 30 hits, and a .456 on base percentage. Right fielder Aaron Judge leads the Yankees with nine home runs and 20 RBI’s.

The Tampa Bay Rays will be without starting pitcher Charlie Morton and relief pitchers Jose Alvarado and Oliver Drake.

Free MLB Picks: Give me Blake Snell and the Tampa Bay Rays on Tuesday.