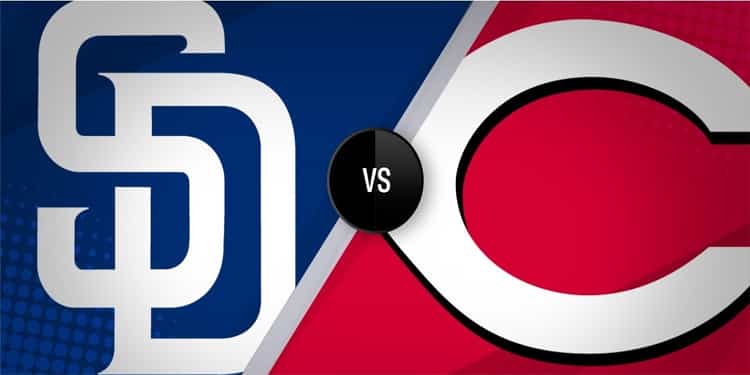 It will be hot and steamy in Cincinnati on Tuesday night when the Padres and Reds fire up the first of three on the banks of the Ohio River. We’ll see Blake Snell for the Padres and Tony Santillan for the Reds in this 7:10 p.m. ET first pitch.

The starting point for this handicap is the weather. We know that Great American Ball Park has one of the highest park factors for home runs. Well, it’s going to be around 90 at first pitch with heat indices up in the low 100s. It is going to be humid and gross across a large swath of the country on Tuesday and Cincinnati is one of the cities in the sauna.

We already know that the home hitting conditions greatly benefit the Reds, who are still second in wOBA at home this season. Their 119 wRC+ does rank just outside the top five, but their .353 wOBA trails only Toronto, who spent the first two months of the season playing home games down in Dunedin, FL in what was basically a launching pad for their offense.

The Reds have the third-highest SLG at home and they’ve also been able to pair a lot of power production with a 10% BB% at home. That all seems bad for Blake Snell, who has walked 40 batters in 66.1 innings of work. Snell has also had some command issues lately, as he’s allowed 22 runs on 29 hits in his last 26 innings. That includes four road starts, with bad efforts in Milwaukee, Houston, Queens, and Denver.

Snell has a 5.29 ERA now with a 4.25 FIP on the season. His Hard Hit% is up to 40.9% this season, far and away his highest in the Statcast era. His previous high mark was last season at 36.9% with the Rays. People skewered the Rays for that deal, but it seems like they were on to something, no?

The profile for Tony Santillan over his first three starts looks concerning on a warm day against a talented Padres offense. The Padres rank third in Hard Hit% and 18 of the 37 batted balls allowed by Santillan to this point have been hit 95+ mph. That is a 48.6% Hard Hit%. So far, he’s been extremely fortunate on batted balls with a .265 BABIP. Santillan, primarily a fastball/slider guy, has walked eight in 13.2 innings already. He does also have 16 strikeouts.

The Padres have already seen him and he has a limited arsenal, with nearly 90% of his pitches coming as sliders or fastballs. I have to think that benefits San Diego in this matchup, as they at least have some kind of look at the 24-year-old.

The bullpen has been a problem area throughout most of the season for Cincinnati. That hasn’t changed recently. Also, with some injuries and increased workload, even the Padres pen has regressed a little bit. A lot of bullpens have regressed thanks to the substance crackdown, as a lot of relievers were likely guilty of using things to increase spin.

This looks like an over game to me. It is a lofty total painted 10 across the board, but it is deserving of that and I think we get double digits in this one.

Other games: Diamondbacks at Cardinals; Rangers at Athletics; Rays at Nationals