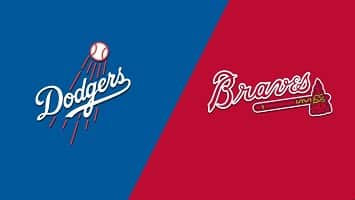 The National League Championship Series could be all but over Wednesday, October 14, 2020, when the Los Angles Dodgers look to avoid a 3-0 hole against the Atlanta Braves. Atlanta will now switch to the home team in the series as the NLCS continues in Arlington. This game will air live on FS1 at 6:05 p.m. EST.

Game one was tightly contested for the first eight innings, but the Atlanta Braves erupted for four runs in the top of the ninth to come away with a 5-1 game one win. Freddie Freeman got things started for the Braves with a solo shot in the top of the first. The Dodgers tied it up with a Keke Hernandez solo shot in the bottom of the fifth. Atlanta had plenty of wasted chances, but once the ninth inning rolled around, they took full advantage. Austin Riley started the inning with a solo shot, Marcell Ozuna added an insurance run with a RBI single, and Ozzie Albies put the game on ice with a two-run shot. This could be an all-time great NLCS.

The second game of the series made news before the game even started as Clayton Kershaw was a late scratch due to back spasms. In his place was Tony Gonsolin and he was roughed up in the Dodgers 8-7 loss. The Braves jumped out to a 7-0 lead heading into the bottom of the seventh inning, but this game was far from over as they Dodgers fought until the very last out. Ozzie Albies hit another top of the ninth solo home run, to make the game 8-3, and it was needed. The Dodgers scored four runs in the bottom of the ninth, and had the game tying run on third base, but could not get the final run needed and are two in a two-game hole.

The Braves are now just -250 favorites to advance to the World Series. Los Angeles can be grabbed at +200

Below is my pick for the Los Angeles Dodgers vs Atlanta Braves. All odds are from DraftKings Sportsbook.

Julip Urias is set to make his third appearance of the 2020 playoffs, first start, in a pivotal game three Wednesday. Urias first made a relief appearance in the NLWCS and held the Milwaukee Brewers scoreless, and to three hits, in three innings of work. The lefty then appeared in a long relief outing and held the San Diego Padres to one hit and one run (zero earned) in five innings of work.

Kyle Wright made his postseason debut in game three of the National League Division Series and was flat out brilliant. Wright held the Miami Marlins to just three hits over six innings, struck out seven batters, and allowed zero runs. The Braves went on to win the game 7-0 and the series 3-0. Anderson will need another brilliant performance Wednesday night to take the Braves one step closer to the World Series.

MLB Predictions: I can’t imagine the Dodgers going down 3-0, so give me Los Angeles in this one.