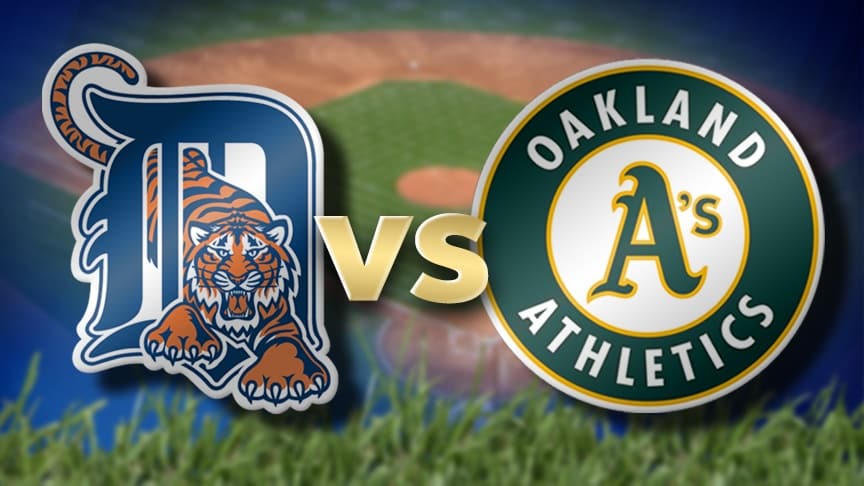 The Detroit Tigers and Oakland Athletics face off against each other in a four-game series at Oakland Coliseum, so here’s the best betting pick for the opening contest on Thursday night along with the latest odds on William Hill Sportsbook.

These two American League foes meet for the first time since 2019, and the Athletics have won 18 of their previous 19 encounters with the Tigers. Oakland opens as a -157 fave for Thursday’s clash, while Detroit sits at +145 odds with a total of 8.5 runs.

The Tigers completely stunned the Astros, look for another upset over the AL West

The Detroit Tigers are 6-6 on the young season following some huge wins at Minute Maid Park in Houston. They swept the Astros as massive underdogs in a three-game series, and the Tigers will try to build on this unexpected success.

Detroit is 25th in the majors in runs scored per game (3.91), but the Tigers are slugging .421, enough for the seventh-best in baseball. Catcher Wilson Ramos already smacked six home runs, while outfielder Akil Badoo added four round-trippers. The Tigers’ relievers own the worst ERA in the majors (7.07), but Detroit has surrendered just 13 runs over its last four outings.

Tarik Skubal will get the starting call Thursday, and the 24-year-old southpaw hasn’t been sharp through his first two starts in 2021. Skubal is 0-1 with a 7.71 ERA after yielding eight earned runs on nine hits and five walks in 9.1 innings of work. He meets the Athletics for the first time in his career.

The Athletics search for their fifth straight win

The Oakland Athletics had a day off on Wednesday, sitting at the fourth spot of the AL West standings with a 5-7 record. After a slow start and six straight losses, the A’s have won five of their next six games including the previous four.

Sean Manaea will toe the slab for the Athletics on Thursday, and the 29-year-old lefty is 0-1 with a 5.06 ERA after his first two starts of the season. Manaea tossed 10.2 frames in total and yielded six earned runs on six hits and four walks while striking out eight. He’s 2-1 with a 2.84 ERA in three career starts against Detroit.

Both teams enter this set in a good mood, coming off some solid displays, so I’m expecting a great game. With Sean Manaea on the mound, the hosts should have a slight advantage over Detroit, so I’m backing the Athletics to win at -157 moneyline odds.

Manaea has to improve after a couple of shaky outings in 2021. He certainly possesses more firepower than Tarik Skubal who’s also been poor thus far. Furthermore, I trust the A’s bullpen more, looking for the hosts’ pitching staff to make the difference here.

The Tigers are surprisingly second in baseball in home runs, hitting 19 round-trippers through 12 contests. I’m not sure they will be able to continue with a strong performance, but considering the teams’ current form on both sides of the ball, I’m expecting nine or more runs in total Thursday night.

The A’s have scored six or more runs in four straight showings. The over is 13-5 in Oakland’s last 18 games overall, and it is 5-1 in Detroit’s previous six contests played on Thursday.