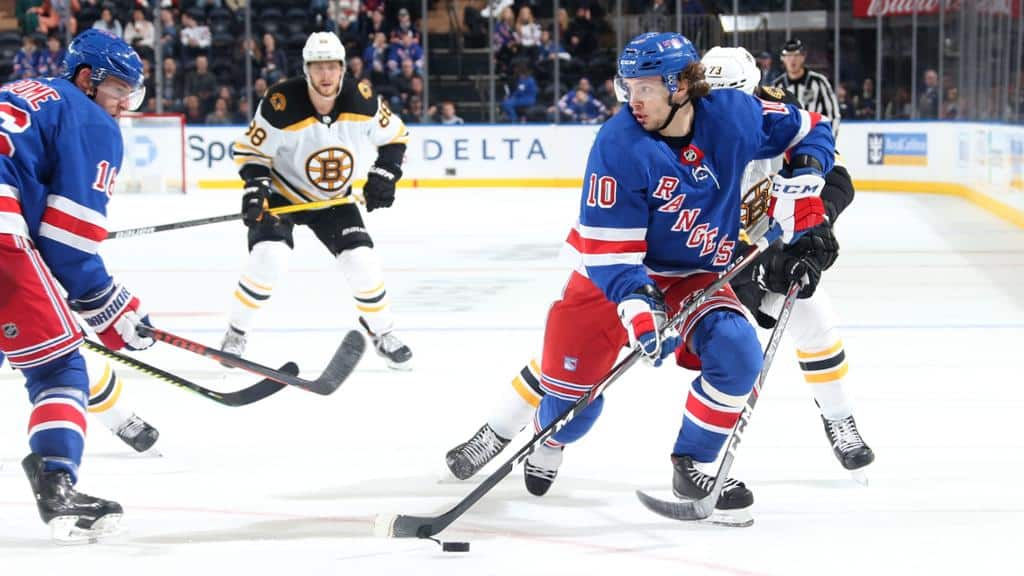 The Boston Bruins and New York Rangers will wrap up a two-game series at Madison Square Garden on Friday night, so here’s the best betting pick for this marquee East Division matchup along with all-important betting tips and notes.

The Bruins opened as firm -166 favorites on William Hill Sportsbook, while the Rangers sit at +150 moneyline odds. Boston outlasted New York 3-2 in overtime this past Wednesday, tallying its fifth consecutive victory over the Rangers.

While the visitors can count on all their important players, the Rangers are without center Colin Blackwell and winger Filip Chytil. Artemi Panarin is listed as questionable, and the Rangers hope the 29-year-old winger will be able to suit up.

The Boston Bruins (9-1-2) started the season with two losses out of their first three contests. Since then, the Bruins have won eight out of nine along with a 4-3 overtime loss at the Washington Capitals.

Boston is the 12th-most efficient team in the NHL, scoring 3.21 goals per contest. The Bruins take 33.5 shots per game (4th in the league) and allow only 24.6 in a return (1st). They are one of the best defensive teams in the NHL, yielding just 2.43 goals per game (3rd) while posting the second-best penalty-killing percentage of 88.4.

Brad Marchand scored the winning goal against the Rangers. He has 16 points in 12 appearances (eight goals and eight assists), as well as Patrice Bergeron who netted six goals along with ten dishes.

The New York Rangers (4-5-3) have won three of their last six games overall, showing some glimpses of quality. Still, they’ve dropped the previous two contests, suffering a 2-0 defeat to the New York Islanders along with that 3-2 loss to the Bruins.

Mika Zibanejad has only one assist in his last nine games, and the Rangers desperately need more from the 27-year-old center. Artemi Panarin leads the way with 15 points (five goals and ten assists), while Pavel Buchnevich added three goals and five dishes.

The Rangers tally just 2.58 goals per game (25th in the NHL) while yielding 2.67 in a return (10th). Alexandar Georgiev guarded the cage against the Bruins and recorded his fourth straight loss, so we should see Igor Shesterkin patrolling the crease on Friday. Shesterkin is 3-3-1 with a 2.31 GAA and a .916 save percentage.

The Rangers have been pretty unpredictable thus far, and if Mika Zibanejad finally gets things going, they will bring the game to the Bruins. However, I have to go with the visitors to win straight up, as they’ve looked like a legitimate championship contender over the last few weeks.

Boston plays tough defense, while the Bruins’ offense is loaded with top-notch players. I’m a bit surprised with the Rangers’ solid defensive performance so far, expecting to see some regression, especially against a heavyweight team like Boston.

The Rangers and Bruins combined for 67 shots last Wednesday but scored just four goals in total in the regulation. I’ve mentioned the Bruins’ excellent penalty-killing percentage, while the Rangers are 10th in the league, allowing seven goals on 41 power-play opportunities.

The hosts have to continue with their solid defensive performance if they want to stand a chance against the Bruins. Therefore, I’m backing the under, though taking the side bet seems like a better option in this matchup.