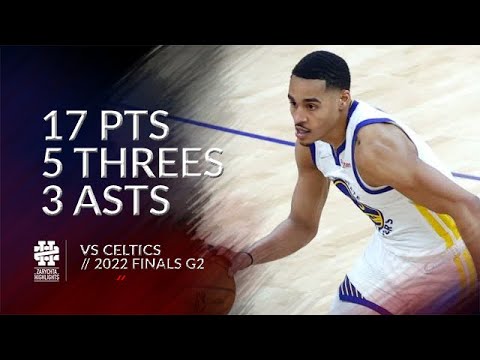 The rise of Jordan Poole, who plays for the Golden State Warriors, has earned him the nickname Kid Splash. This is a reference to his senior teammates, Stephen Curry and Klay Thompson, whom fans call the Splash Brothers.

Like his teammates, Warriors fans have already coined a term for Poole, which is the “Poole Party.” However, Poole said the perfect nickname for him should be something that better aligns him with his teammates.

When the Warriors selected Poole in the 2019 NBA draft, many people called him the “Splash Nephew”. After a couple of seasons in the G League and NBA, Poole earned his nickname thanks to the way he carried the offense for the Warriors during the 2020-21 season.

Poole said that he earned his nickname for being able to see how talented his teammates were and learn from them. The 22-year-old shooting guard also said that he had a good intuition about where he would go next.

“In terms of the whole Splash Nephew, Splash Kid, Splash Brother thing, I just feel like I knew I was capable, and I had two really great players in front of me who I was going to be able to learn from,” Poole said about his nickname. “I just had a really good intuition that it would go in the right direction.”

Being able to share a locker room with Thompson and Curry, who are both future Hall of Famers, has allowed Poole to learn from them. The 6-foot-4 shooting guard was adamant he could contribute to the team, especially with the two players around.

“Being able just to learn from them and kind of follow in their footsteps is pretty dope,” Poole said. “I always feel like I’d be able to make an impact, especially with those two guys in front of me and around me. I kind of felt like it would happen, it would just be a matter of time. But it’s really cool, really special to be a part of for sure.”

The Warriors are currently preparing for Game 3 of the NBA Finals against the Boston Celtics. If the Warriors want to win the game, they should address Thompson’s struggle with his display.

That being said, no Warriors teammate knows more about Thompson’s tendencies than Curry, and he has asserted that Thompson would soon return to his best shape.

During the Warriors’ Western Conference finals series against the Dallas Mavericks, Thompson performed rather well. After struggling from beyond the arc in the first four games, he made eight of his 16 attempts from deep in Game 5.

Through the first five games of the Warriors’ series against the Memphis Grizzles, Thompson made 12 of 41 attempts from beyond the arc. He was able to make 8 of 14 shots in Game 6 alone.

Despite his rather poor performance lately, however, the Warriors do not seem to worry.

“I’m not particularly concerned about it because this isn’t the first time it’s happened,” coach Steve Kerr said. “Klay has a way of responding to mini-slumps or whatever you want to call them.”