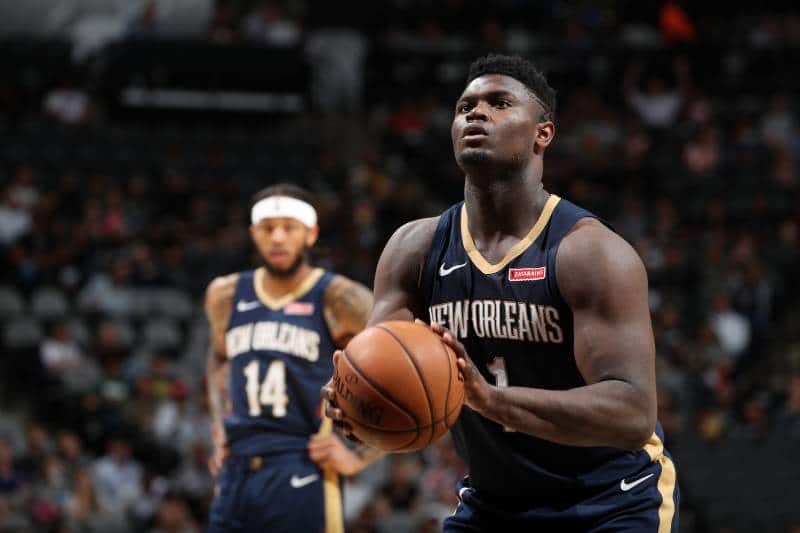 The 1st overall pick in this year’s NBA draft has been backed by more hype than any player since King James himself. Zion Williamson has certainly caught the eye of casual and serious basketball fans alike with his superhuman athleticism and powerful dunks during his single season at Duke University.

There’s no question that Zion has the talent to be a force in the NBA, but it’s starting to look like he won’t be able to continue playing the way he did at Duke. After just 4 preseason games, the rookie phenom has already been declared out for at least the first few weeks of the regular season. He missed the Pelicans’ preseason closer against former Duke teammate RJ Barrett and the New York Knicks due to what was originally reported as knee soreness.

The Pelicans performed testing on Williamson to determine just how serious the knee problem actually is. For now, they are indicating that it is not a serious injury, but they are ruling Zion out for the first few weeks of the regular season. This is extremely alarming for a 19 year old that has yet to play a real NBA game to be missing time due to injury and overuse.

New Orleans has indicated that the extended absence is simply to be overly cautious. This is definitely a smart approach considering how Zion’s play style and body type simply do not mesh well for long term success. As dominant as Zion was in college and in preseason games, he does now have a history of multiple injuries to his knees. At Duke he sprained his right knee, then missed almost the entire Summer League with left knee soreness.

Standing at 6’7, it appears that Zion is simply too heavy at 285 lbs for his current style of pogo-stick athletic basketball. For reference, legend Charles Barkley is a close comparison in terms of athletic ability and size. He weighed just over 250 lbs during his playing days, a solid 30 pounds below Zion. Barkley is also 6’6, making him similar to Williamson in stature.

Looking at current players with insane athleticism, LeBron James is one that certainly fits the bill. However, he weighs just 250 lbs and is also an inch taller than Zion. Additionally, LBJ literally spends millions per year just to keep his body in shape.

This means that there is literally nobody in history that has shared Zion’s crazy athletic ability while also carrying that much weight. Unfortunately for him, this is a huge precursor to a career shortened by knee injuries if he doesn’t change something, and fast. If Zion wants to have a long and successful career, he must either limit his athleticism and/or drop around 20 lbs.

Williamson’s preseason performances have made it clear he is definitely the best player on his team and still the favorite to win Rookie of the Year. However, if he becomes injured and/or requires load management (aka missing games for rest), then someone like #2 overall pick Ja Morant or #3 overall pick RJ Barrett could steal the award away simply due to Zion not playing enough games.

It certainly isn’t too late yet for the stellar 19 year old, but whether or not he has managed to lose weight before his return and what happens in the first few weeks afterwards will tell a big story as to how the whole season will play out for Zion.