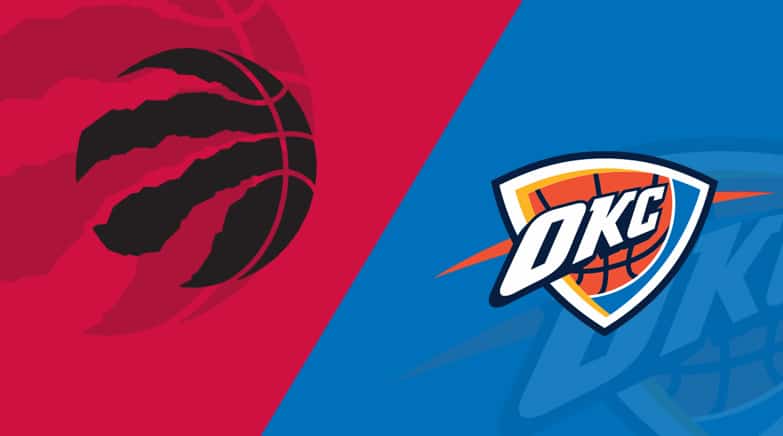 In the Thunder’s last contest, they covered the 1-point spread against the Charlotte Hornets, 104-102. The total points for the game (206) were just under the O/U total of 206.5. The Thunder had a much better free throw rate (0.213 vs. 0.109) and held the Hornets to an effective field goal percentage of 0.450 (below their season average of 0.509). Oklahoma City received a boost from Steven Adams, who recorded 14 points and 12 rebounds.

The Raptors were victorious over the Boston Celtics in their last matchup, 113-97, comfortably covering as 4-point favorites. The game’s combined points (210) finished under the O/U total of 214.5. Toronto out-rebounded Boston. The Raptors had 15 offensive rebounds and 53 total rebounds, while the Celtics had seven and 31, respectively. Kyle Lowry was Toronto’s top scorer with 30 points on 10-for-17 shooting from the field.

After splitting two games last season, these teams will meet for the first time this year. In the last contest, the Thunder won 116-109. Oklahoma City had a much better turnover percentage (10.7 vs. 19.4). Toronto, meanwhile, did a great job of making free throws (18-21; 85.7 percent).

Oklahoma City heads into the game with records of 16-15 straight up (SU) and 18-12-1 against the spread (ATS). Matchups featuring the Thunder have a tendency to go under the total (58.1 percent).

Meanwhile, Toronto owns records of 22-10 SU and 17-14 ATS. Contrary to Oklahoma City, a little over half of Raptors games have finished over the projected point total.

Both teams have had a player step their game up over their last five games. Dennis Schroder (24 points,5.4 assists) has been fantastic for the Thunder while Lowry (24 points,9.2 assists,6.4 rebounds,1.2 steals) has made solid contributions to the Raptors.

Oklahoma City might have a tough time finding the bottom of the net as they square off against one of the league’s best defenses. Toronto currently ranks second in defensive efficiency while the Thunder rank 15th in offensive efficiency.

The Thunder rank second in three pointers allowed per game (30.5) while the Raptors rank last (38.7).

The Thunder rank seventh in second chance points allowed per game (12.2) while the Raptors rank 26th (14.4).

In its last five contests, Oklahoma City is 3-2 ATS with 3 unders and 2 overs.

Toronto is 2-3 ATS with 4 overs and 1 under over its last five games.

The Thunder’s average margin of victory in their last five games has been 3.4, up from 0.8 for the season.