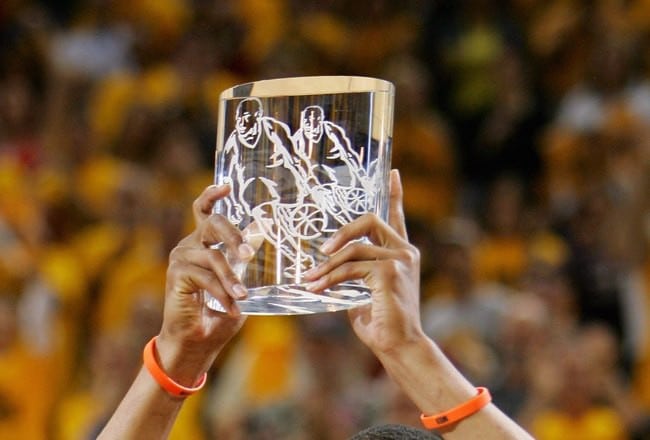 One of the most exciting NBA awards to try and analyze is the Most Improved Player award. This award is typically awarded to a player with a breakout season, meaning there’s a good chance of seeing a new star pop up this season.

There are many factors that go into winning a MIP award, so it can be viewed as extremely circumstantial. There are surely several players within the league that have the ability to massively improve on the previous season, but not all of them will because they need to have the right team and environment around them to support it.

Generally speaking, you won’t see a MIP winner on any of the league’s elite teams, mainly because existing stars already consume a good chunk of the team’s possessions. Instead, teams that are low playoff seeds or not at all are great candidates to foster the Most Improved Player. To figure out what else helps to produce a MIP candidate, let’s look at the winners from the last five seasons below.

Pascal Siakam and his growth last season are a huge exception to MIP winners being on weaker teams. Siakam and the Raptors did win the 2019 Championship, but this definitely wouldn’t have happened without Kawhi Leonard. Usually a team becomes an elite force a few seasons after a player wins MIP.

Two great examples of this include the 2016 and 2017 winners, CJ McCollum and Giannis Antetokounmpo. Giannis is another major game changer here because he actually won MVP last season as he lead the Bucks to the best record in the league. McCollum needed Wesley Matthews and the rest of the old Blazers squad’s core (LaMarcus Aldridge and Nicolas Batum) to leave the team for him to flourish. Now, both Milwaukee and Portland are playoff contenders that have a great chance of making the Finals.

Four players on this list experience scoring increases of 6-10 points compared to their prior season (McCollum had a 14 point increase) to go along with increased rebounding and assist numbers. This isn’t an insane feat to accomplish, but actually executing it is another story altogether. So let’s analyze five players who have a good chance of achieving this for the upcoming season.

Bam Adebayo had his second professional season last year and improved his game across the board. He did have a small bump in minutes, but Hassan Whiteside was taking up most of the playing time at center for the Heat. Now Hassan is in Portland and Bam looks to be the starter for Miami. The Heat did bring in a new star this offseason in Jimmy Butler, but this should only improve on Bam’s case for MIP.

Jaylen Brown actually had worse stats last season than he did the year prior. However, this absolutely is not because his game regressed. Instead, there were two main reasons for his lowered production – playing time and the extreme dysfunction of his whole team. The combination of Kyrie Irving’s passive aggressive leadership and the return of a lessened Gordon Hayward was simply too much for the team that made the Eastern Conference Finals just a year ago.

The roster that got the Celtics there was primarily their younger players, so this caused plenty of friction within the squad. Now Kyrie is in Brooklyn and JB has another chance. Brown would be higher up on this list, but there’s a great chance that his teammate Jayson Tatum also has a redemption season this year.

Baby Durant had a scorching start to the season last year, averaging 18.9 points in October and 17.7 points in November on a healthy 47.5% shooting average. Unfortunately, he was sidelined by a major injury and missed a large chunk of the season. He returned in February and took a few months to return to form. In April, he averaged 15.8 points on 50.9% shooting, although this was just across 5 games.

LeVert is a deadly scorer and he had great efficiency when he was healthy. He would definitely be the top pick if it weren’t for the arrival of Kyrie Irving during the offseason. Hopefully LeVert still gets enough touches in a fully healthy season to bolster his chances of winning MIP.

JJJ would be the top pick here, but the arrival of rookie and 2nd overall draft pick Ja Morant might hurt his chances. Jackson Jr is a long stretch forward with excellent defensive instincts, which is perfect for the style of basketball being played today. Jaren didn’t play after the All Star break last year due to an injury, but he’ll be ready to go on opening day

While Ja Morant will steal some of the spotlight from him, Morant was an elite point guard in college and should create several opportunities for JJJ. At the same time, the arrival of Morant means that Jackson Jr won’t be the only star in town, so he may not improve as much as he would have without him. Regardless, Jaren Jackson Jr is an excellent candidate for 2020 MIP.

Scary Terry was another member of the dysfunctional 2018-2019 Boston Celtics team that produced less compared to the previous season. Kyrie Irving was healthy last season, which meant that Terry Rozier saw a reduction in minutes and touches. During the 2017-2018 season when Rozier had to play as a starter in the later part of the season, he averaged 15.6 points, 6.4 rebounds, 5.1 assists, and 1.2 steals in 33.6 minutes across 15 games.

Now Rozier is no longer in Boston and instead has the green light on the Charlotte Hornets. Considering that his two best teammates are Nicolas Batum and Cody Zeller, expect to see Rozier take between 15-18 shot attempts per game. Even though he is a fairly inefficient shooter, Scary Terry does have a chance of averaging just under 20 points per game due to the weakness of the rest of his roster. This will definitely be enough to win the MIP award if Jaren Jackson Jr doesn’t improve by much.

Of all five picks on this list, Terry Rozier is the only player who has a new team. Even better, he’s now the starting point guard for the Charlotte Hornets and doesn’t have a strong supporting cast. Terry wanted to start in Boston, but he didn’t have a chance and his production suffered as a result. Now he has what he wants and it’s up to him to execute. Expect to see Scary Terry average around 18 points and just under 6 assists to claim the 2020 MIP award.