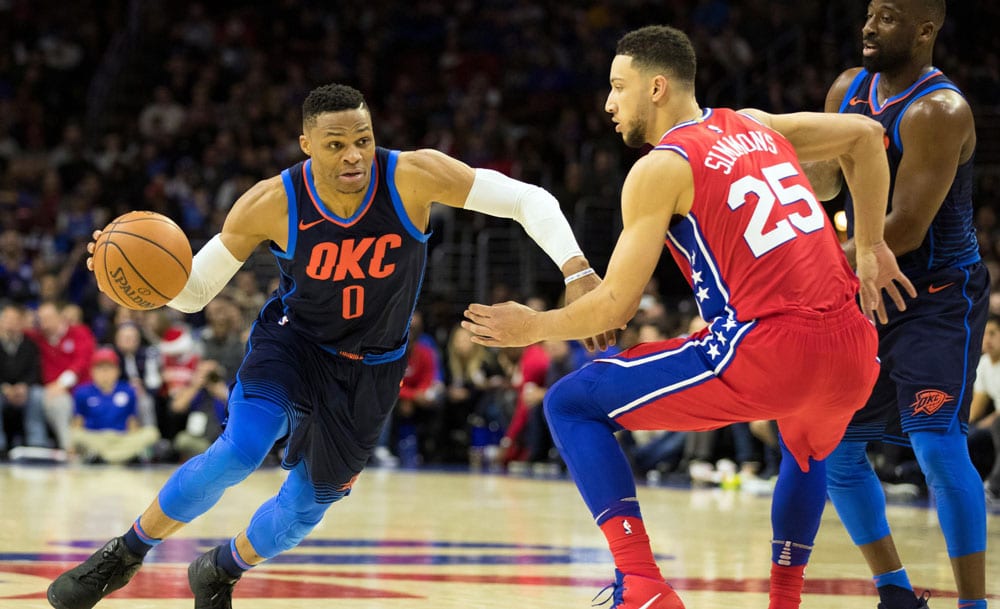 NBA Betting Tips: How Much Faith Do You Have In Russell Westbrook And Ben Simmons?

So, it will take some work for either to win the highest individual honor in the NBA but both have a good shot at winning the highest team honor—the NBA championship.

To that end, both will need to bring their best game to the court throughout the season. If they do, then there is a good chance not only that their teams could win a lot of games, but that these guys can accomplish something significant as players.

PointsBet.com wants to give you the chance to bet on it:

If you think about how many shots guys take in a game and the entire season, it would seem like hitting 11 three-pointers over the course of a season would be a piece if cake—if you can shoot. Simmons? He can’t shoot.

During his two seasons in the NBA, he has attempted 17 three-pointers. He knows he’s not good at them, he knows it, so rather than hurt his team by trying to shoot them, he doesn’t. But then he had to go and make a three-pointer the other night when the 76ers were facing a team from China in preseason action.

But at the time, the 76ers had nearly doubled the score of the team from China. The crowd was pushing him to do it; it was a meaningless game after all. He still looked to his teammates for approval before putting the shot up.

In a regular season game, will the crowd by egging him on? During away games, maybe. He may put up more attempts this year then the last two combined (which is only 17). But don’t count on him to make five let alone 11.

As for Russell Westbrook averaging a triple-double—it seems like a no-brainer when you see that he did just that the last three seasons. But that was partially due to a lack of talent on the roster; if he didn’t make the play, then no one would.

Then the Thunder acquired Paul George and he did it two more times.

The concern is that Westbrook may not get enough touches because the Rockets will likely look to keep James Harden happy first. But that shouldn’t matter as much as some fear it will. Westbrook played nice with Paul George for two years. He can play nice with Harden, too (and get his touches).

After watching him do it for the last three years, there is no reason to think he can’t do it again. It would be a better bet if the odds were a little longer but go ahead and take them at +200.