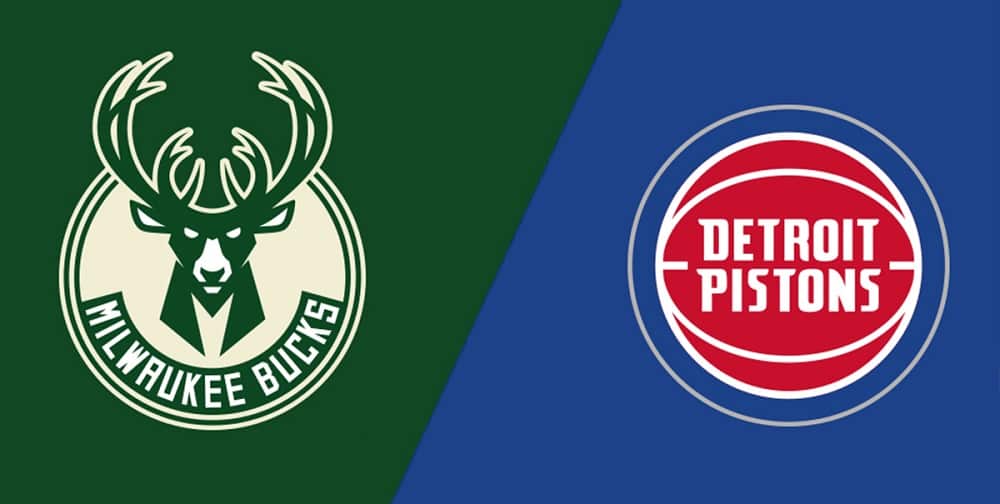 The NBA betting action continues Wednesday night with plenty of interesting matchups on the schedule including the third meeting of the season between the Milwaukee Bucks and Detroit Pistons. These two Central Division foes met each other twice last week, and the Bucks won both contests while covering once in the process.

According to Sugarhouse Sportsbook, the Bucks are strong favorites for Wednesday’s clash at Little Caesars Arena in Detroit. They are undefeated in 13 straight encounters with the Pistons including the previous six in Michigan.

After a shaky start and three losses in their first five outings this term, the Milwaukee Bucks (7-4; 6-5 ATS) have gone 5-1 SU and 4-2 ATS over their last six showings. They are coming off a 121-99 thrashing off the Orlando Magic as 10-point road favorites, as the Bucks dominated in the fourth quarter (35-17).

Milwaukee shot 50.5% from the field and scored 50 points in the paint. Khris Middleton led the way with 20 points and 10 rebounds; Giannis Antetokounmpo added 22 points and six rebounds in just 27 minutes on the floor, while Bobby Portis tallied 20 points off the bench.

Detroit will try to avoid the second straight loss

While rookie PG Killian Hayes is sidelined with a hip injury, Derrick Rose has problems with his knee and is questionable to play against the Bucks. If Rose doesn’t suit up, Delon Wright (8.0 PPG, 3.4 APG) will continue to drive the Pistons’ offense.

Last week, the Bucks beat the Pistons 125-115 as 16-point home favorites and 130-115 as 12-point home favorites. I’m pretty sure they’ll defeat Detroit once more and, hopefully, cover a huge spread. The Bucks shot above 54.0% from the field in each of their previous two matchups with Detroit.

The Pistons have struggled mightily on both sides of the ball since the opener. Their defense cannot cope with this Milwaukee team, and the Pistons will need a terrific shooting night to keep it close. Considering the Bucks’ defensive potential, I don’t see that happening here.

Even if Derrick Rose suits up, the Pistons will have a mountain to climb on the offensive end. They scored 115 points in each of the previous two meetings with the Bucks, but I wouldn’t be surprised if they fail to surpass a 100-point mark in this one.

The betting trends are suggesting the over that has hit in seven of the last eight games between these two foes. Also, their last five duels at Little Caesars Arena went in the over, as well as six of the Bucks’ last nine road tilts.

Milwaukee loves to play at a fast pace, so the Pistons have to slow down things and take good care of the ball or they’ll allow a bunch of points once again. This is a tough wager, but I will follow the betting trends, expecting to see a lot of easy baskets in transition by Milwaukee and probably a garbage time in the fourth.